tl;dr summary: AB 51, a proposed lane-splitting bill, has been significantly watered down to merely authorize CHP to publish guidelines on motorcycle lane-splitting safety. Unlike the original version of AB-51, this should have no effect for California bicyclists. 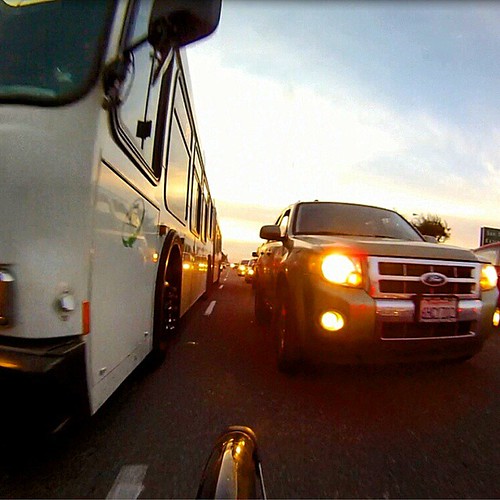 Lane-splitting refers to the practice of riding a two-wheeler between two lanes of traffic, and is done to filter past stopped or very slow traffic. Since “that which is not prohibited is allowed,” motorcycle lane-splitting is commonly practiced in the Golden State. Some cyclists (including Yours Truly) also split the lane in heavy traffic, although the practice remains controversial even among those who promote the philosophy of “Same Roads, Same Rights, Same Rules.” John Forester himself remains an advocate of lane-splitting.

Some spoilsport, however, lodged a complaint with the state that these guidelines were developed in the absence of a formal rulemaking process and, therefore, could be considered “underground regulations.” CHP and OTS were forced to curtail all education and outreach efforts on lane-splitting.

So, Assembly members Bill Quirk and Tom Lackey introduced AB-51 to fill this legislative void. Kansen Chu from San Jose was later added as a co-sponsor. This bill would explicitly authorize lane-splitting for motorcycles, but also put rules on the practice, namely in the form of the guidelines listed above. Police organizations and the insurance industry supported AB-51, but ABATE, American Motorcycle Association, and several smaller motorcycling groups strongly opposed AB-51. It’s perhaps worth noting that there was no involvement by the All Power Bike Lobby in this legislation.

Because of opposition from the motorcycle lobby, the bill authors let this bill die in committee.

The resurrection of a dead bill

On June 1, Quirk and Lackey introduced a completely amended AB-51 to the Assembly Transportation & Housing Committee. All of the previous language has been stricken and replaced with “The Department of the California Highway Patrol may develop educational guidelines relating to lane splitting in a manner that would ensure the safety of the motorcyclist and the drivers and passengers of the surrounding vehicles.”

In other words, it authorizes the CHP to develop and publish the guidelines they previously published and later removed. It adds no legal restrictions or rules on two wheeled travel than already exists, so, for now, lane-splitting for human-powered bicycles will remain in the same legal gray-area that exists now. Hurray republican government.

You can read the full bill text of AB-51 and its legislative history here.