In California, about 1,000 miles of the 4,000 miles of limited access freeway are open to bicycles according to this answer in the Caltrans FAQ section. Nobody knows the real number of miles, however, because the existing bike access maps, where they exist, are so outdated and crummy. In some cases, not even Caltrans knows where bikes are permitted. We’re forced to rely on in-depth knowledge of state law and direct observation to determine where bikes are allowed.

Caltrans District 4, which covers the nine county San Francisco Bay Area, are now developing a District 4 bike map showing where bike access is allowed within the Bay Area. They have published a draft and seek input on its accuracy from local agencies and other stakeholders. 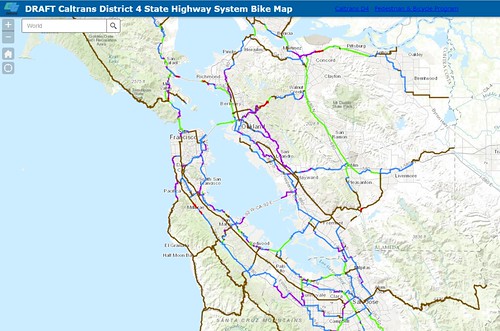 You can view the draft D4 map here. The default map shows only the state highway system. This map shows all state routes, including those that are not limited-access freeways.

For Highway 17, I’m also talking about including the Old Santa Cruz Highway alternate route on this map. While bikes are legal on 17, nobody recommends riding this mountain road. I’ve rescued a couple of out-of-state tourists traveling to the coast from the Bay Area over the past few years.

To view alternate routes, you need to enable the “alternate routes” layer by clicking the layers icon (looks like a stack of books) in the upper right of the map.

Restrictions on bike access are governed under California Vehicle Code 21960. All roads are by default open to cyclists, but authorities may close some limited access freeways to bikes. Any restriction must be clearly signed — this is why you see those “PEDESTRIANS BICYCLES MOTORIZED BICYCLES PROHIBITED” signs at every freeway entrance. If that sign is missing, bikes are permitted. You will not see a “bicycles allowed” sign in California.

Because most of our existing maps are outdated, bike advocates will drive or bike past freeway on-ramps to determine where bikes are allowed and log the information to web pages like this. These days we can use Google Streetview, too, to determine this ground truth.

I think the dynamic District 4 draft map is pretty snazzy. You can zoom, pan, enable or disable layers, and search. The GIS information should be easily exportable for other uses. What do the other Caltrans districts in California offer for their freeway bike maps?