I don’t often mention my online bike route tool because it’s mostly a recreational programming thing for me, but it has features that some people might find interesting.

Like most such tools, you enter a start and destination, hit “Bike There,” and the tool will (hopefully) give you a somewhat reasonable route. This screen capture shows the route selected by Google in blue, vs the route suggested by Mapquest in red. 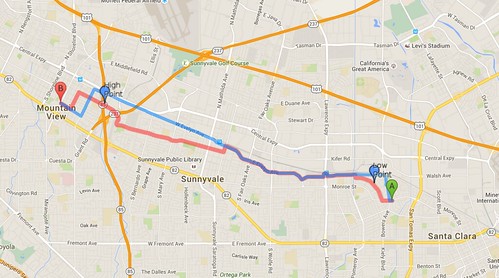 The most recent addition is an option to overlay the Strava global heat map onto your bike route. The currently selected color scheme shows more popular routes in red, and less popular routes in green. The red, unfortunately, hides the MapQuest route, so that needs help.

Although Strava is primarily used by cyclists who tend to be more competitive and male, Strava claims that for urban areas, their research shows that the heatmap tends to show the more popular cycling routes for all people who ride bikes for any reason.

Because I think I use this layer in violation of Strava’s Terms of Service (which allows this type of mashup only in the context of tracing routes for the OpenStreetMap project), we’ll see how long this lasts before they block access.

Another somewhat recent addition is implementing Mapquest’s weighting for hills and bike routes. If you prefer a more direct route and don’t mind riding in traffic, select a lower “bikeways” value in the drop down box. Select a higher “bikeway” value if you value easier riding conditions over distance. You can do the same for hill preference. Changing these preferences can possibly lead to a failure to find a route resulting in a cryptic error dialog.

The Google vs Mapquest comparison has always been available. It was done as a way to avoid violating Google’s TOS, but it’s still interesting to compare routes.

I’ll play around with the Strava heatmap layer to improve its visibility when overlaid on the Google map. I’m not a UI guy and realize the interface is clunky, and admittedly better tools are available. If there’s interest I might spend a little more time on this map.

I mashed a combination of Google Maps, Mapquest, and Leaflet APIs together for this map. Adding the Leaflet API in particular seems to have broken some of my radio button functionality in random, hard-to-debug ways. This maps evolution and hybidization over several years as these APIs have changed results in finicky behavior and overall clunkiness, so it’s probably time to start over.