Richard MasonerApril 14, 20161 Comment on How low can you go? Scooter + bike = ultra low step through

Check out the “Moox” bike — a crazy scooter + bike combo shown below with its inventor, Mike Silvestri. 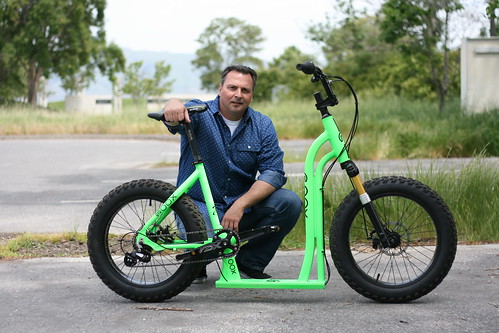 Mike was inspired by the hundreds of people he sees departing Caltrain in San Francisco on their bikes and scooters, and created this bike+scooter combo as a fun, commuter option. He let me demo this prototype last week. To be honest, I expected a shaky, “toy” feel typical of cheap scooters, but Mike has the geometry and stiffness dialed in so this feels like riding a mid-range BMX bike with gears and fat tires. It’s a little bit heavy, but so what — I feel like this bike can easily handle the abuses that Caltrain bikes must withstand.

But let’s not talk about that. The first thing I noticed about this bike is the ultra low step through.

I first became aware of the issue of people with hip and joint problems after talking with a couple from a local retirement community who rode folding bikes because of their low step-through frames. “I know it’s a girl’s frame,” the gentleman told me, “but I had hip surgery and this is the only kind of bike I can ride.”

Many people continue to ride bicycles in spite of mobility limitations, but swinging a leg over the top tube can be a hindrance. Some companies respond to this market with bikes like the Streamway from Sun Bicycles and the Easy Boarding line from Biria shown below.

I didn’t measure the step through, but I think the Moox goes even lower than those other bikes available in the market. When I asked Moox about this, Sarah Kling, Moox’s VP of Customer Experience told me, “we have indeed had some feedback about how it could be a helpful design for those with mobility issues. We even received an email recently from a physical therapist with some ideas for how he could use the Moox Bike with his clients.”

I think it’s awesome that this bike can be super practical for those with stiff hips and super fun at the same time. There’s a secret and totally not-endorsed bonus feature, too: a passenger can stand on the scooter part and hang on to the BMX-style bars while the stoker pedals. Mike and I talked about how cargo might fit in that space between the legs, too. We’re not sure if that could work, but perhaps some enterprising soul can figure something out. 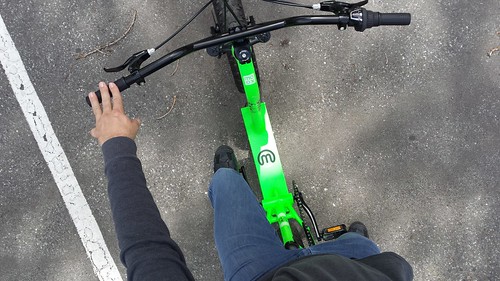 This bike is meant for the California multi-modal commuter. Those four inch tires look tough and they provide plenty of cushion for potholed roads, but they won’t fit on a bus bike rack. Mike says he believes that low platform will clear the typical slot on bus bike racks if you mount skinnier tires. Hanging racks on some other systems such as the Capitol Corridor might also be challenge with those wide wheels, though I’m uncertain about this.