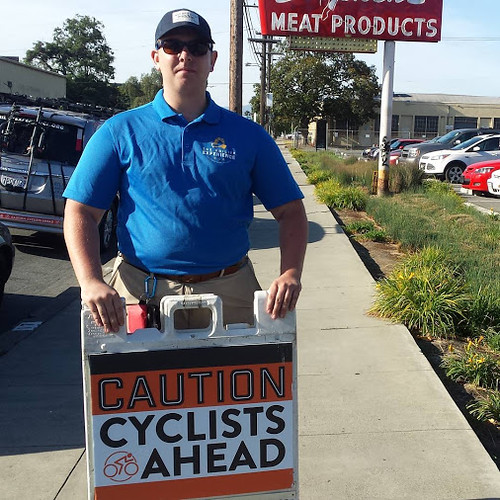 This “CAUTION: CYCLISTS AHEAD” sign piqued my interest this morning, so I camped out for a few minutes to see what would happen. It’s located just around the corner from the major transit terminal near downtown San Jose’, California. There are always “cyclists ahead” at this intersection.

Even on “Friday light”, dozens of bike commuters converge on Diridon Station just as a series of trains disgorge their passenger loads, with nearly a thousand people on foot and on bike coming and going while mixing with dozens of cars, buses, employee shuttles, Uber rides, and taxis. 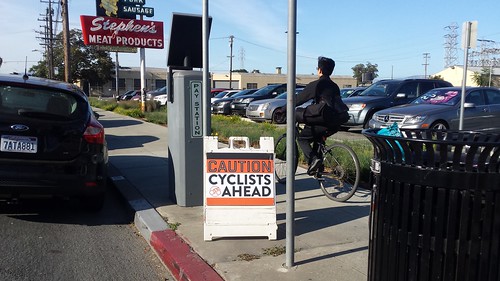 Through this seemingly chaotic urban dance, I see something that doesn’t fit: a small group of young men in matching kit riding a straight line with military precision, barking “Car up!” “Car back!” “On your left!” and, as they approach a red light, “STOPPING!”

Roadies who are clearly on a mission stopping at a red light in downtown San Jose? Who does this?

In the meantime, commuters on all kinds of bikes (folders, fixies, fatties, city bikes, bike share bikes, Walmart bikes, 90s mountain bikes, even the occasional road bike), continue to stream casually on either side, salmoning, shoaling, filtering, sidewalk riding, and otherwise committing the multitude of sins characteristic of urban riding as they negotiate their way through traffic.

The light turns green for young roadies and they ride past. 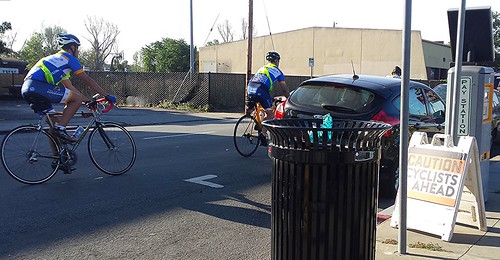 Shortly afterwards, Jack in the blue shirt strolls by to collect this sign, so I asked what’s up. He and the riders are members of the Pi Kappa Phi fraternity on a cross-country charity ride to support his fraternity’s philanthropy, The Ability Experience. Jack, who provides sag for this ride, is from Minnesota and attends Iowa State, and, from what I gather, his buddies on bike are similarly from universities in Midwestern states.

It was very cute to see this very different riding culture compared to the urban riding I generally see here.﻿ Kudos to these kids for representing and for their ride across America. I wish them the best.