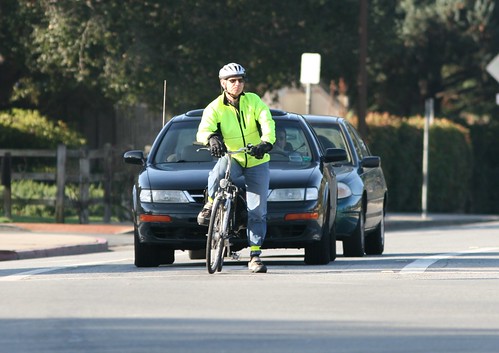 I especially like Aaron questioning the conventional wisdom that cycling is “scary” or unwise, but he follows up with advice about safe cycling with traffic, which can mostly be summed up as “don’t be a moron.” Among the items in his list, though, I’ve always had difficulty with what Aaron calls his 2nd Law: “You Are Invisible To Cars.”

I know “you’re invisible” is a shortcut way to write “ride defensively,” but advice to assume invisibility still bugs the stupidly pedantic part of me. “Invisible riding” suggests, to me, a paranoid riding style that makes getting from point A-to-B impossible for more than trivial distances, and would probably wreck my mental health. People who ride the wrong way on the sidewalk and in the gutter tell me I’m insane for riding in traffic because those anthropomorphic cars don’t see me. A couple of people have even told me in all earnestness that they won’t ride with lights at night because “if they don’t see you, they can’t hit you.”

If I’m riding with traffic, I ride to be seen. My default assumption about other road users is that they see me, though of course I’m alert for the unaware obliviots on the road. This philosophy has served me well over the past three decades plus of adult cycling. Bike Arlington’s PAL program sums up my general style of riding pretty well, though it also includes a good dose of asserting my right to use the road.

Being a PAL means being:

H/T to Dave S of WABA for telling me about PAL.

#BikeSchool A7: people who bike here learn "PAL": Predictable, Alert, Lawful. If drivers did the same, #VisionZero would be complete.