Richard MasonerJune 6, 20165 Comments on Pro tip: You can anticipate this stuff

Do they still talk about “Defensive Driving” in driving school?

Last Thursday, I posted this seconds-from-disaster photo of a kid who stopped directly in front of me on the Beach Street cycletrack in Santa Cruz, California. 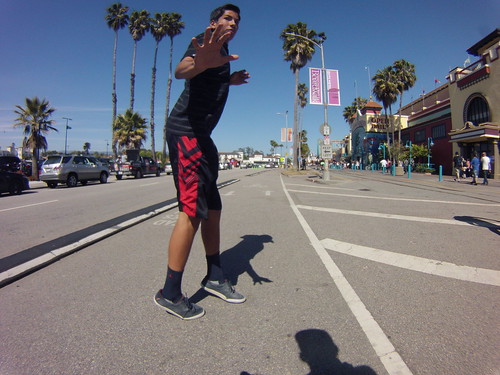 He ran across two lanes of motor traffic without bothering to check for approaching traffic on the two lanes of cycletrack in front of the Santa Cruz Beach Boardwalk.

As far as I’m concerned, this popular tourist destination is a pedestrian realm, and I travel at a speed appropriate for “unexpected” incursions like this because, well, it’s not at all unexpected. This kid freaked out and stopped directly in front of me like a startled squirrel, which was kind of stupid, but I still braked in time to avoid hitting him.

Let’s look at another situation: you’re flying along at 25 MPH on a mostly empty path when you see a jogger up ahead on the right side of the path. There’s no turn or other obstruction, so I honestly expect the jogger to continue straight. Still, I’ve seen these guys dart immediately left without looking just like in this video, so I’ll probably ease up on the pedals. If children or pets are in the vicinity, I’ll likely cover my brakes, too.

If I crash spectacularly into a jogger, I too could get 90,000 views on my bike-vs-jogger crash video, versus the measly 250 views for my handlebar cam view of me avoiding the kid on Beach Street. In spite of the possible Internet fame, I think I’d rather avoid the pain and damage when possible.

While I’m on the topic of path riding safety, here’s another pro-tip: If you see a group ahead of you suddenly slow down, consider that they might be doing so for a reason. During one of our bike trains last month, a large-ish group of us slowed and bunched up on the trail. Aggro rider in full kit approaching too fast from behind yelled profanities and flipped us the bird as he passed closely, without bothering to check why we slowed. Another rider ahead was stopped on the side of the trail with tire and tube in his hand. It was a narrow spot near a blind turn, and the front of the group offered assistance as they slowed.

Sure, we can rant about what the other guy should do, but the only behavior I can control is my own. Ride defensively, my friends.