This sign announcing a closure for Ewert Road in San Jose, CA surprised me this morning. As far as I’m aware, there has been no announcement of this road closure. Ewert is a vitally important connector for cyclists traveling east and west. The immediately adjacent U.S. Highway 101, a limited access highway which provides the same east-west access to motorists, remains open to motorists this week. 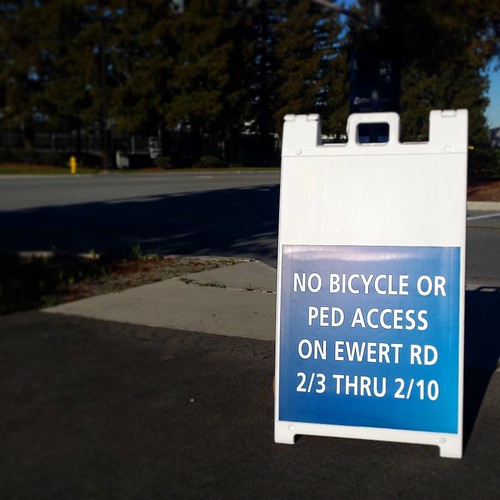 Ewert Road is the east-west connector around the north end of San Jose International Airport for cyclists traveling between the Guadalupe River Trail and Central Expressway. The airport closed this road to motor vehicles a few years ago but kept it open for “authorized vehicles” and bikes and walkers, which makes it a fantastic cycling route. The Strava global heat map below shows its popularity: the brightest blue highlights the tremendously popular Guadalupe River Trail, with Ewert not far behind in popularity. 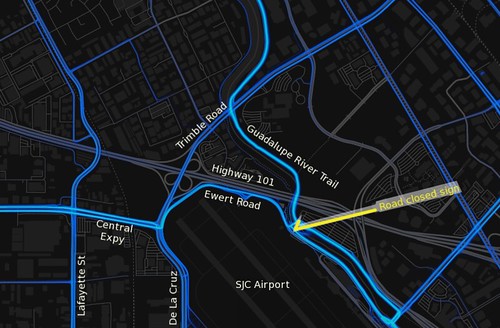 The sign says Ewert Road will be closed from February 3 to February 10, 2016, I assume for Super Bowl 50 related activity in spite of the airport’s status as “the unofficial airport.”

This route provides important access to cyclists from their homes and transit in central and south San Jose to large employment centers along Central Expressway, Lafayette Street, San Tomas Expressway, and beyond. This route provides bike access to some of the largest names in Silicon Valley, including Intel, nVidia, AMD, Applied Materials, Marvell, Broadcom, EMC, Gigamon, Arista, Avaya, Polycom and more. Other tech employers with a large presence in this area include Texas Instruments, HGST, Huawei, Fujitsu, Dell, and Citrix.

The nearest detour is Trimble Road / De La Cruz Avenue, which adds almost two miles to the trip and involves passing over an ugly interchange with Highway 101. The next closest detour is around the south end of the airport to Coleman Avenue, which I think is even worse. I invite Airport staff to ride a bike on either of these detours and tell me they think they’re acceptable.

The nearest “bike friendly” detours are probably either Park Avenue across San Jose to Homestead to San Tomas Expressway, which adds 15 miles to any trip to Central Expressway, or the Bay Trail, which adds a whopping 20 miles. Tack on another hour to an hour-and-a-half to your morning commute, folks.

I’ll try to post on-bike video from both of these routes tonight or maybe tomorrow.

The suggested detours include fun bonuses for cyclists! The bike lanes on Great America Parkway are blocked by large electronic signs with parking and road closure information, forcing cyclists to take the lane on a busy, six lane arterial signed for 40 MPH. Because Tasman Road is closed, many motorists are detouring down Lafayette Street to Agnew Road, neither of which are designed to handle the volume of traffic, so the bike detour involves lane sharing with impatient commuters who haven’t quite figured out where they’re going, so they’re paying more attention to their map app than they are to other people on the road.