Safety engineer Paul Kearney was just driving along when he nearly hit a group of kids on bikes who came out of nowhere. He writes about his professional recommendations for the August 1941 issue of Rotarian Magazine. 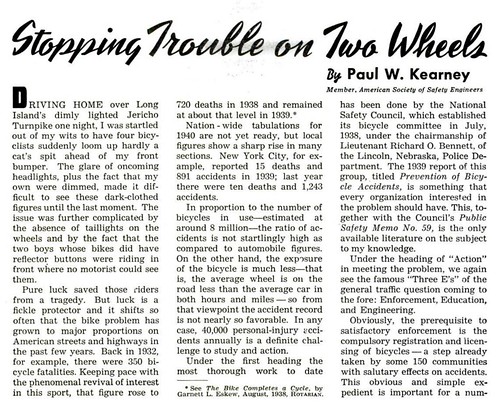 Kearney suggests mandatory licensing and registration “for the establishment of minimum standards” because “riding, like driving, is a privilege, not a right” in spite of court decisions to the contrary in the previous century when bikes first began appearing on American roads. Kearney the engineer reports also believes “the mere reporting of a violator’s tag number will result in his swift apprehension, which is important because “72% of [ bicycle crashes ] involve some traffic law violation by the cyclist.”

He briefly notes the presence of sidepaths in Europe and especially the Netherlands, where the sidepaths are separated from the highway by “grass plots, rows of trees or other medial strips” which “doubtless have a great bearing on their enviable bicycle safety record.” Kearney, however, dismisses these measures as economically unrealistic in the United States.

He writes about safety, which is a good thing, but what Kearney actually wants is for bikes to stay out of his way. Kearney brags that during a mandatory safety check at a Chicago high school, only three out of 50 bikes passed the inspection, mostly due to missing horns and lights. Those 47 kids still need a way to get to school and back. Replace bikes with cars on the road, and you’ll indeed reduce the total number of cyclist fatalities, while increasing danger for the entire system as a whole.

You can read the entire article here.