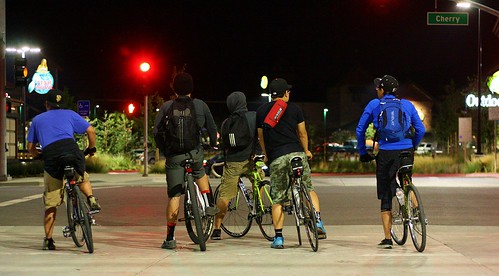 When I attended the Silicon Valley Bicycle Summit the other week, I met local cycling legend Ray Hosler. He and I both were interested in what California Bicycle Coalition Director David Snyder said when somebody asked why CalBike doesn’t support an “Idaho Stop” law for California. You can read what Snyder had to say in Ray’s post on the topic here, where I also learned that I apparently coined the term “Idaho Stop” in 2008.

The term “Idaho Stop” came into use as a result of the California effort in 2008. Prior to that it was called “Idaho Style” or “Roll-and-go.” “Idaho Stop” was first used by the bicycle blogger Richard Masoner in June 2008 coverage of the San Francisco proposal, but in reference to the “Idaho Stop Law.” In August of the same year, the term – now in quotes – first showed up in print in a Christian Science Monitor article by Ben Arnoldy who referred to the “so-called ‘Idaho stop’ rule.”[10] Soon after the term “Idaho stop” was commonly being used as a noun, not a modifier.

This block was added by Wikipedia contributor “Volcycle” on March 3, 2016.

I dug a little further, and found a mention by Jim Stallman in May 2007. Jim is a long-time cyclist advocate who lives in Saratoga, California. In a discussion about all of the stop signs along various cycling routes across the city of Cupertino, Stallman wrote:

Stelling should have had its stop signs removed 15 years ago when the freeway opened but this never happened. Maybe California will adopt the Idaho Stop Law sometime in our lifetimes. CBC hasn’t supported it, though.

I guess I participated in helping to popularize the term, but I had heard it from Stallman and probably others before 2008. Somebody who understands Wikipedia’s citation rules better than me can make the correction to the article, if you want.

The Idaho Stop rule is a popular name for Idaho’s law, which (in a nutshell) says cyclists may treat red lights as stop signs, and stop signs as yield signs.

H/T to my colleague Naoto, who pointed out Ray’s mention of me.