Sal Pizarro writes about the 250 Adobe employees who make 1600 trips each month by bike at Adobe’s headquarters in downtown San Jose. 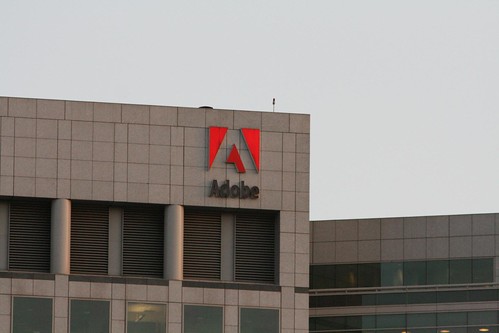 He mentions some of the ways Adobe encourages bike commuting for their workers, but he missed what I think is the key element: Adobe’s decision in the 1990s to build a million square feet of office space in three high rise towers in downtown San Jose, California, which contrasts sharply with the sprawling horizontal office park campuses of most Silicon Valley businesses. It’s a little far from high frequency transit to call Adobe’s location transit-oriented, but the towers are within very easy bike distance of Caltrain, light rail, and the downtown transit malls.

Pizarro says to “give Adobe workers extra credit for navigating downtown streets and traffic.” And, yeah, sure, it could be much better, but riding across downtown where bikes are faster than cars sure beats sharing the road with 50 MPH traffic typical of the suburban parts of Silicon Valley. The Guadalupe River Trail — an important bike commute route — connects directly to Adobe, and is patrolled by Adobe private security.

Incentives like food and bike subsidies are good ways to demonstrate your company’s commitment to helping bike commuters, but if you really want to make a difference, locate your fast growing business near transit and bike facilities.

Pizarro’s article in the Merc-News: Adobe puts bike-riding employees on the right path. If you want to check things out for yourself, swing by the Fehr and Peers Bike to Work Day Energizer Station on Thursday morning, located on San Fernando Street immediately west of Adobe Systems. The Google Streetview I embedded above looks towards Adobe from San Fernando Street.