Richard MasonerApril 5, 20171 Comment on Faster and farther on the MVMT Carnelian

I’m a road guy, so I tried the MVMT Carnelian road bike. 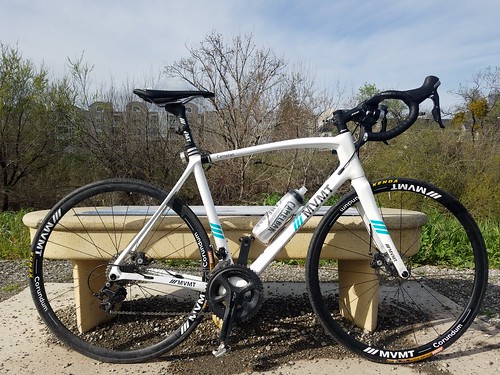 I tested the Carnelian during the worst of the storms we experienced in the Santa Cruz Mountains earlier this year, taking it out on the few non-rainy days. This is not an adventure or cobble bike, but I rode over shattered roads and confidently weaved around fallen redwood trees. The disc brakes may have saved my life during a fast descent in the mountains: a tree fell in front of me, taking down a power pole. I came to a complete and controlled stop with live power lines bouncing literally inches from my front wheel.

Two days of nice weather in late February was the perfect opportunity for a longer ride, and the Carnelian shines in the rolling hills of California Highway 1 along the Pacific Coast.

The beefy bottom bracket enables snappy acceleration and pedaling efficiency. I’m not savvy enough to know precisely how a bicycle’s geometry affects parameters like comfort vs efficiency and performance, but this bike earned me four new Personal Records (per Strava) on the Swanton Loop in Santa Cruz County, and I didn’t even feel like I was trying that hard on this early season metric century. MVMT has a heritage in time trial bikes, and the Carnelian wasn’t designed to be an endurance or sportive bike, but it’s almost as comfortable to ride as my trusty old Specialized Roubaix but with enough liveliness to brighten the ride.

Why a nicer bike?

Which brings me to the title of this post: Faster and further. People frequently ask, “Why don’t cyclists who ride for fitness ride heavy bikes? Won’t heavy bikes help them achieve fitness faster / more quickly / with less effort?”

There are numerous reasons people might buy lightweight road bikes, but for me the short answer is: long distance rides are more enjoyable and less painful on quality, well designed bikes.

I rode 40 miles last Friday, and 32 miles on Saturday. I intended to complete a metric century on both days, but had to abandon at distances that normally are moderate for me. The reason: I rode a heavy, 28 pound $300 clunker made with high tensile (aka “gas pipe”) tubing and bottom-of-the-barrel components, mostly to prove a point. That cheap bike is fine for short-distance city riding, but for these longer distances it left my wrists numb and my shoulders, neck and back sore. I think the heavy, straight-gauge tubing probably transmitted a big percentage of road shock directly to my spine and arms via both the seatpost and through the forks.

The Carnelian, by contrast, has stiffness where it counts in spades, but my middle-aged joints really appreciated the superior design and material that gave me a good feel for the road without knocking me senseless. MVMT’s American marketing manager in San Mateo described Taishan’s proprietary carbon layering process techniques that frankly went over my head, but it all means a bike I can ride fast for hours on end.

The Carnelian will retail for $1680 and will be available for online purchase at MVMT Bikes on April 15, 2017. Unlike other 105-equipped road bikes approaching this price range, the Carnelian is full 105, instead of “105 light” with a mix of downgraded and Brand X components to reduce cost. MVMT bikes come with a five year frame warranty, and two year warranty on MVMB components. There will be a crash replacement program allowing riders to exchange their damaged frame only for a price that amounts to about 30% off retail.