I arrived early for the 2017 Sea Otter Classic with vendors still setting up at Laguna Seca Raceway. I’m getting the lay of the land in the morning chill when I see a grandfatherly gentleman by himself unloading boxes and adjusting bikes at the Breezer Bikes tent and, whoa! It’s the legendary Joe Breeze himself! 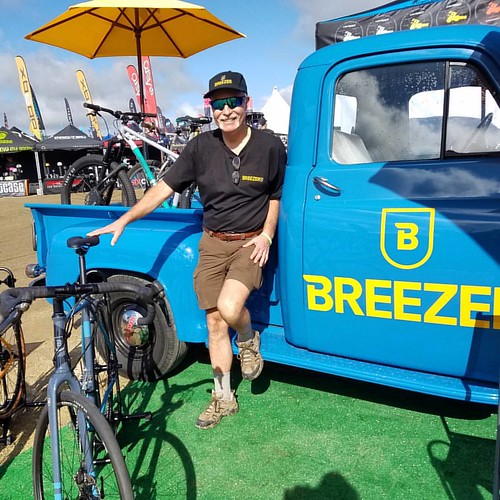 Joe is a wonderful story teller so we begin to shoot the breeze (*ahem*) about that Breezer with serial number 2 sitting in the truck behind him. This bike was built before Tom Ritchey came onboard, and then I discover Breeze used to ride with the late Jobst Brandt, whose legendary adventure rides on road bikes with sew-up tires through the 1970s are the stuff of legend in the San Francisco Bay Area.

Besides his adventure rides and that famous book about bike tires, Jobst is perhaps best known for his acerbic assertions on all aspects of bicycle and transportation technology. He once spent 20 minutes at the Foster Freeze in Boulder Creek, CA, for example, describing to me precisely why yellow is the only acceptable color for a bicycle frame.

Breeze shared one of his Jobst Brandt experiences with me. They were riding and Brandt asks, “Joe, have you wondered why oil patches on the road are shaped like ellipses?”

Breeze admits he’s never thought about this issue, but stuff like this apparently kept Brandt up at night as he engaged himself in the Socratic method puzzling over oil stains. “Oil is a liquid, and drops of liquid falling in a vacuum are spherical.” Brandt then explains in great detail the physics of a drop of oil as it leaks through an imperfection in the oil pan seal, hits atmospheric drag to flatten the sphere, then splatters on pavement which further deforms oil pattern.

In 1971, Breeze was Just Riding Along in Milan when he crashed into the back of a Nash Rambler convertible. He flipped up and over, landing in the rear seat. The three European occupants of the front seat look back in alarm at this crazy American teen. The front fork of Breeze’s bike is bent, so the driver gives Breeze and his bike a lift to the Cinelli factory.

Breeze takes his damaged bike into the factory, but the technicians refuse to touch it. “This is Cinelli, we do not work on Legnano bike. But Signor Cinelli, he back from lunch in 10 minutes, maybe he fix.”

And sure enough, the legendary Cino Cinelli bent the fork back into ridable condition for a 17-year-old Californian, and Breeze tells me this chance encounter changed the direction of his life. “Who knows what I’d be into today if I didn’t crash in Milan that day in 1971.” 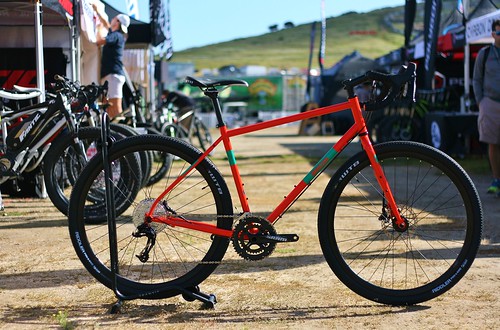 And oh yeah, Breezer had some cool new bikes at Sea Otter: the 2018 Doppler, the Inversion, and the Radar. I liked them all. I’ll describe them in more detail later if I find the time, but in the meantime you can see photos in my Sea Otter 2017 photoset.

I’ll post more Sea Otter stories throughout the week, but you can hear these stories for yourself if you show up early enough to meet these very accessible bicycle legends for yourself.