I’m standing in the shade near the GT Bicycles booth at the 2017 Sea Otter Classic when I turn around and see an old guy performing crazy flatland tricks on a 90s GT Zasker mountain bike with 3 spoke nylon wheels. A beat after he says something in German-accented English, I suddenly realize I’m standing right next to Hans Rey. I automatically shout “No way!” without thinking about it.

The young, early 20s guy who owns the vintage GT obviously knows the reputation of Hans Rey, and grins ear-to-ear as the Mountain Bike Hall of Famer who popularized trials riding autographs his old Zaskar. 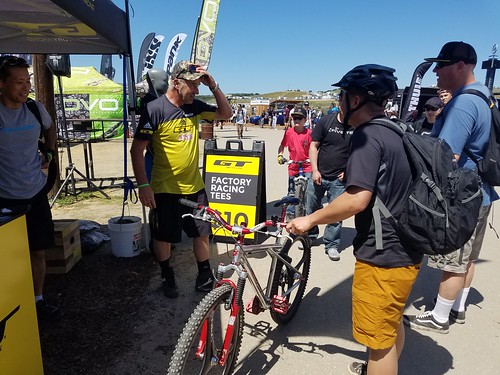 A crowd of children soon appear, and Hans happily signs his name “Hans No Way Rey” for them. 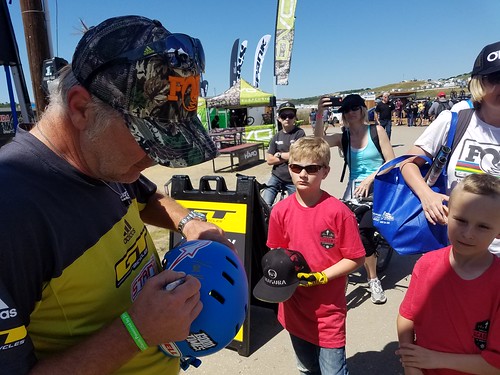 GT has been sponsoring Rey since the 1980s, and I’m thrilled to see that they continue to do so in spite of their cycles of ups and downs in the bike industry.

At Sea Otter, GT displayed their “Grade Carbon Pro” endurance carbon fiber endurance road bike which GT advertises is for “the gravel road to work” which really appeals to my idea that bikes should be about utility as well as fun. The seatstays are those low-modulus resin-impregnated glass fibers (as opposed to higher modulus carbon fiber used for the rest of the frame) that twang like bass strings when you pluck them, and give a ton of cushion at the rear end. It’s pretty incredible. Other features include fender mounts, SRAM Force 1×11 drivetrain, SRAM HRD brakes, WTB Exposure 32c tubeless bead tires on 700c wheels. This bike punches a lot of the right buttons for me; I wish I had decent photos of it.

Posted In mtb
Tagged GT | Sea Otter
Manage Cookie Consent
To provide the best experiences, we use technologies like cookies to store and/or access device information. Consenting to these technologies will allow us to process data such as browsing behavior or unique IDs on this site. Not consenting or withdrawing consent, may adversely affect certain features and functions.
Manage options Manage services Manage vendors Read more about these purposes
View preferences
{title} {title} {title}