Friday’s Pro Tip: Don’t try to bike through a police barricade when a maniac in the national capital starts shooting. Even Canadian law enforcement will take you down, albeit politely and with utmost professionalism.

More bike news below the photo of cyclist Bernard Desgagne on the ground.

Back in the Reagan era, bike lights consisted mostly of 3 to 6 volt incandescent bulbs powered by D cells or bottle dynamos. For a while, I also strapped a portable fluorescent lamp to my top tube. This lamp, intended for car camping use, was powered by eight D cell batteries and gave maybe 45 minutes of light. I hoped this lamp enveloped me in a soft glow to enhance my overall conspicuity.

This seems to be the idea behind this Kickstarter for a 360 light, which is significantly brighter than my old camping lamp. I really really like the idea. Single lights for $119 are still available through this fully funded Kickstarter, with a front and back kit costing you $229.

There’s this guy in Salt Lake City who pedals (yes, pedals, not peddles) a wheeled piano.

Made in USA denim cycling jeans from Upright Cyclist. These jeans are built in a burly 12.5 ounce heavyweight, dark indigo Cone denim loomed in the U.S. and sewn in Los Angeles.

How did people start complaining that the world’s toughest road bike race is too tough to ride?

Path homicide leads to increased path security. Note how different this is from the New Jersey response, which is to close the pedestrian walkway when they have problems.

Golden Gate Bridge District proposal to charge pedestrians and cyclists who cross the bridge out of step with Bay Area values.

Singletrack Magazine explains how to convert your fatbike to tubeless.

Carnage in Sacramento kills three: I’m trying to figure out the sequence of events described in this story involving a wrong way cyclist and out-of-control SUV. It seems the SUV driver was also going against traffic, so this was a rear-end collision? The driver was reportedly traveling 50 MPH through a heavily residential street signed for 35 MPH. The article mentions a bike lane, but the only “bike lane” is a narrow, striped shoulder on northbound Howe.

a 53-year-old woman was southbound on Howe Avenue north of Burney, riding a bicycle the wrong direction in the northbound bicycle lane , when a 2008 Chevy Tahoe drifted to the left across traffic lanes and struck her.

Hertzell said the SUV burst into flames when it hit the tree.

Why does this San Jose police car have a police bike from Hayward? I wanted to ask the officer who stepped out of this car, but he was busy talking with a citizen on the sidewalk and I needed to get going. Note the headbadge on this bike, too, along with the handcuffs used to secure the bike to the trunk rack. 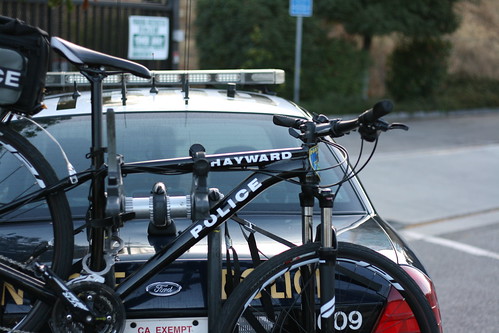 Factodesign on a cheap inexpensive yet beautiful bike.

Talking Headways podcast on those missing from the bike advocacy conversation.

A new glove design puts the high viz where you really need it.

Tom Babin’s book about winter cycling Frostbike is now available in a dead tree edition in the USA, which might work better as a Christmas gift than the electronic edition.

Speaking of Tom, he answers the common question: Why is that annoying cyclist on the road instead of on that nearby path?

Have a wonderful weekend, all. Note to Northern California cyclists: Rain this weekend!