Hi all and … Monday. Apologies for the extended radio silence.

I’m trying to force a cycling metaphor into love but I’m not sure it works. Cycling to the top of a mountain range is painfully slow, grinding hard work and, frankly, not a lot of fun. Experiencing your personal King of the Mountain feels great, and the descent that follows is fast and exhilarating.

Love also builds slowly towards euphoria. The swift descent from the mountain top happens stunningly fast; unlike with cycling, however, this descent is far from rewarding.

END_OF_DOCUMENT_TOKEN_TO_BE_REPLACED

From Betsy M regarding City of Santa Clara council meeting the evening of Tuesday, May 17 16, 2017.

There’s a council meeting tomorrow night in Santa Clara (which is a schedule conflict with the Plan Bay Area meeting in San Jose’s King Library).

There’s a creek trail extension in item 13. B. 3. in the consent agenda. It is the evaluation only (no shovels or asphalt yet) of remaining portions of the Saratoga, Calabazas, and Hetch Hetchy trails in Santa Clara. Follow the attachment link from the city’s website to see the lengthy PDF.

Things on the consent calendar usually just get passed, which is fine. If there’s anything to do here, it’s to remind the council and the consultants to talk to their own BPAC, to the bicycle community, and to SVBC while planning these trails. The other thing I see missing in the document is anything about connection and continuity. The J.W. Christian Greenbelt runs along the Hetch Hetchy corridor in Sunnyvale. Calabazas creek is the shared border between Santa Clara and Sunnyvale. VTA has a bike plan, which I don’t see mentioned in this document, but which is directed at intercity connectivity. (Santa Clara’s own bicycle plan dates to 2009 and has so far been all but ignored.)

I also see no mention of improving connections to these trail corridors on adjoining city streets, or of the various agencies which might someday collaborate or provide funding (Open Space Authority, Air Quality Management District, MTC, etc.).

Further down in the council agenda, there’s also yet another information item on the San Tomas trail closure, with not a lot of detail on what information might be presented. For all this item has been discussed, there doesn’t seem to have been much effort to reach out to SVBC or to the trail users to identify a better alternative. 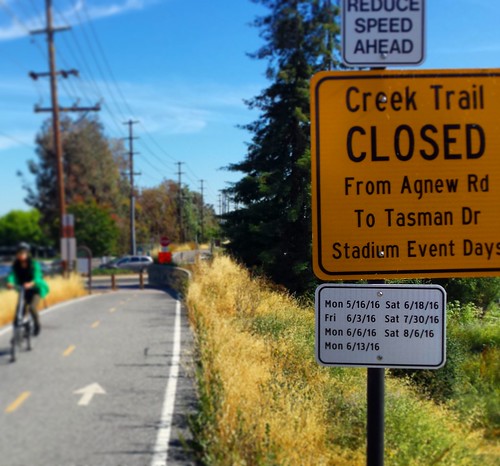 Tuesday’s meeting begins at 4 PM with a closed session, reconvening with a public meeting beginning at 5 PM. The public presentation portion begins after the consent calendar so my guess is you can probably show up around 6 and still be on time to give your comments.

Speaking of San Tomas Trail closures, the trail will close to the public at 1 PM on Wednesday, May 17, 2017 for the U2 Joshua Tree Tour. Does Bono still ride a bike after his serious crash in 2014?

The Amgen Tour of California Men’s Race continues today with a finish in San Jose. Watch live on the Tour Tracker. Unlike every previous year of this race, I will attend any of the stages in person. 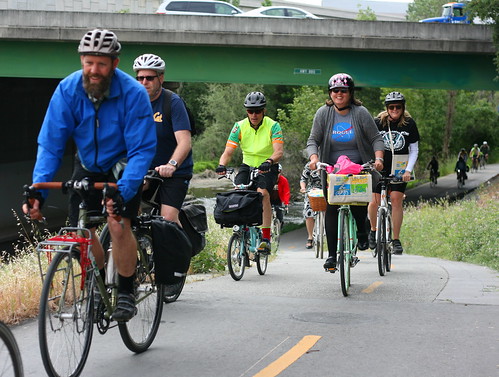 END_OF_DOCUMENT_TOKEN_TO_BE_REPLACED

The city of Burlingame, CA in San Mateo County will host its second community meeting to discuss a Complete Streets redesign of California Drive. The aim of the project is to improve bicycle, pedestrian and motor vehicle access on California Drive from Murchison Drive to south of Broadway. This 1.4 mile segment of California Drive is an important connector for cyclists in the city of Burlingame bicycle network and the San Mateo County North-South bike route. The meeting takes place 6 P.M. to 8 P.M. on Tuesday, January, 24, 2017 at the Burlingame Main Library in the Lane Room, 480 Primrose Road, Burlingame, CA.

Opponents are already spreading Fear, Uncertainty and Doubt to derail this project, so you should make plans to attend if you’d like to see good improvements here.

East Bay bike riders want a bike-ped bridge from Oakland to Alameda Island to avoid riding through the Posey Tunnel; the US Coast Guard (which has a station on Alameda), says any bridge must allow passage of tall vessels. In spite of strong support for a moveable bridge, City of Alameda officials say such a bridge is unfeasible.

The city of Belmont, CA in San Mateo County is currently recruiting members for its Parks & Rec Commission, which serves as the city’s Bike and Pedestrian Advisory Committee. The deadline to apply is 5:00 P.M. Friday, January 20, 2017, and the application is available on the City’s website: www.belmont.gov under “City Council and Commissions,” by calling (650) 595-7408 or 595-7413, or in person at the City Manager’s Office or the City Clerk’s Office, City Hall, One Twin Pines Lane. There are four openings for adult seats on the Parks and Recreation Commission for two-year terms, and one opening for a term that expires in 2018 (one current commissioner will be resigning to relocate out of the area). The Parks and Recreation Commission meets the first Wednesday of the month at 7:00 p.m. and makes recommendations to the City Council on matters pertaining to Belmont’s Park and Recreation programs, as well as on capital improvements to the City’s various parks and open space areas. They’re also recruiting for the Planning Commission, which advises City Council on zoning and land use issues.

The SMART (Sonoma-Marin Area Rail Transit) Train will offer free introductory rides through July 4, 2017 when it opens later this Spring. Since SMART will have bikes-on-board service, this sounds like a good opportunity for a train ride out to Santa Rosa for biking in Sonoma wine country. Details in the press release [PDF].

[ Ad, kind of: ] My best-selling item for January from my Amazon Affiliate account is this water-based Albedo 100 reflective spray-paint, infamously promoted by Volvo.

Thank you to SVBC’s Emma Shlaes for many of these event notifications Thank you also to Manito Velasco, who provided the FUD on California Drive photo and wryly notes: “It’s not an official Complete Streets project until the first complaints about taking parking away or other inflammatory ‘scare’ language surfaces.”

Big Basin Highway in Santa Cruz County: Caltrans began a three month, 17-mile resurfacing project on Highway 236 / Big Basin Highway near Boulder Creek last Monday between Pine Street in Boulder Creek and Old Mill Road near Castle Rock State Park. A full closure of upper Highway 236 begins this Monday, September 19, 2016 through October 3. According to Caltrans, the full closure will only happen during the weekday between 8 A.M. and 4 P.M. One-way reversing traffic control for the entire 17-mile length of Highway 236 (from Boulder Creek, through Big Basin State Park to upper Highway 9 near Castle Rock) will be in effect when needed during this re-paving project. Read the Caltrans press release info here.

The Guadalupe River Trail will be subject to multi-hour closures the week of September 19 from Trimble Road to Montague Expressway. The Santa Clara Valley Water District is dredging the river bed. Hopefully, this means the lower creek trail will drain a little better during the winter rainy season. San Jose Bike Train runs during this closure, so we’ll probably detour to 1st Street north of Trimble Road.

It’ll be awesome. You should go. The basics:

A walk to support the National Alliance on Mental Illness 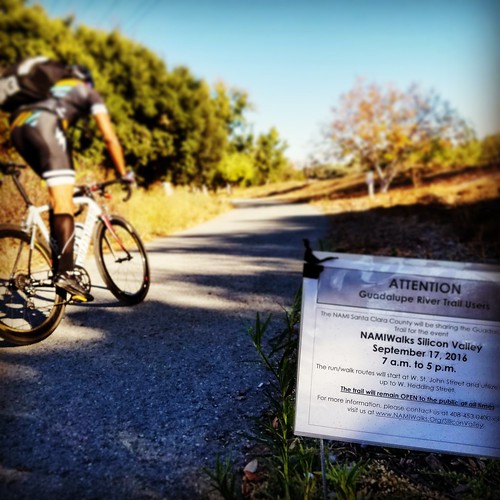 And now for a personal note. Tomorrow, my wife Sara and I will participate in NAMIWalks Silicon Valley on the Guadalupe River Trail in San Jose with her team at Good Samaritan Hospital, where she works as a clinician at the Behavioral Health Unit. This walk benefits the National Alliance On Mental Illness (NAMI), a grassroots advocacy group representing families and people affected by mental disorders in the United States. NAMI provides education, research and support for people and their families impacted by mental illness. Please consider helping by making a contribution via Sara’s online contribution page. Any amount helps. Thank you!

People showed up by the zillions to enjoy a walk and a bike ride on car-free Avenue des Champs-Élysées on Sunday, May 8, 2016. More photos below.

END_OF_DOCUMENT_TOKEN_TO_BE_REPLACED

Posted In Quick news
Manage Cookie Consent
To provide the best experiences, we use technologies like cookies to store and/or access device information. Consenting to these technologies will allow us to process data such as browsing behavior or unique IDs on this site. Not consenting or withdrawing consent, may adversely affect certain features and functions.
Manage options Manage third parties Manage vendors Read more about these purposes
View preferences
{title} {title} {title}