Last night I set my alarm for 4:30 AM for my anticipated 32 mile ride “over the hill” (i.e. over the Santa Cruz Mountains) to the office. I have no recollection of this alarm going off; all I know is I groggily looked at the clock, saw that it said 5:45 and hurried out of bed, into my clothes, onto my bike and to the bus stop.

It’s now too late to bike the entire distance. I luckily caught the 6:15 bus (which had one space available for my bike) for the trip to San Jose. From there, I joined the 30-strong bike convoy organized by VTA, which is the county-wide transportation agency that builds highways and runs the transit system. 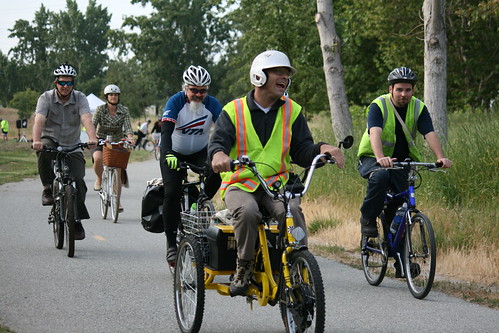 Bikes make transportation accessible to a much broader range of the population than driving (including self-driving cars) ever will.﻿

After riding with the VTA crew for a couple of miles, I went to the Oracle Santa Clara “Energizer Station,” which served up eggs, sausage, assorted baked goods, fruit, coffee and OJ to about 100 people who passed by. Next year, we’ll know to locate the Energizer Station closer to Lafayette Road — we saw perhaps another hundred people on bikes turn off onto Garrity Drive a block away from our station. 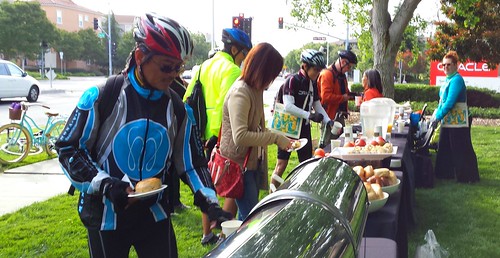 Steffan rode 84 km from San Francisco to the office, while several others biked in from locations near and far and a well done to every single one of you. A good time was had by all, and everybody appreciated the delicious breakfast spread. Those of us in Santa Clara only had 10% of the turnout they had up at Oracle HQ in Redwood City, where a thousand people enjoyed a free hot breakfast as they passed through.

Sadly, I heard from several people that an overly aggressive Bauer hotel shuttle bus driver hooked a cyclist in Burlingame, CA (near Oracle HQ) and seriously injured him. The driver barged through an intersection in spite of the presence of dozens of cyclists and sent one of them to the hospital. Discussion about this at the SF2G list, in which several riders report near-hooks by the same shuttle operator.

Bike Away From Work Bash

If you’re in the South Bay, don’t miss the Bike Away from Work Bash. This takes place at San Jose City Hall in the Rotunda on Santa Clara Street between 5th and 6th Streets from 6 PM to 8 PM. Be sure to RSVP!