The Joint Powers Board that governs Caltrain has started the process of planning for electrification, which they anticipate will start in 2019. They’re taking public comment on bike car capacity, among many many other items under consideration. 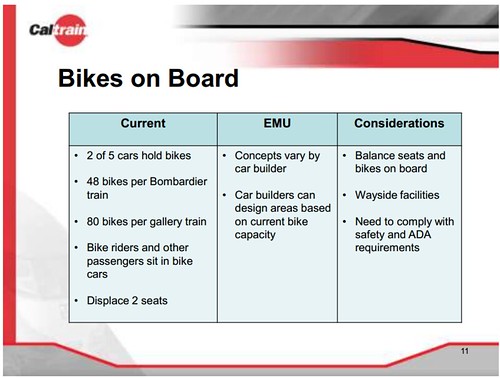 Caltrain ridership has doubled over the past five years, and they anticipate another doubling over the next decade. Because commute time trains are now packed wall to wall to 125% capacity, the board wants to increase capacity with electrification, which allows more capacity and more frequent service over the current diesel sets they currently run. Currently, northbound commute time headways range from 5 minutes to 27 minutes between 5:45 AM and 8:03 AM from San Jose, with an average headway of 11 minutes. Electrification can apparently improve that, allowing Caltrain to push more trains (and people and bikes) up and down the San Francisco Peninsula.

Caltrain plans to purchase EMU (Electric Multiple Units) to augment and eventually replace the diesel trains. Unlike traditional trains, which have a locomotive pulling a set of passenger cars, the EMU combines a locomotive and passenger car into a single, self-propelled unit. The plan currently is to have these self-propelled EMUs on both ends of a six car set, with the four cars in between providing no motive power. The train operator controls the train from a cab at the head-end, similar to how BART and VTA light rail trains are operated. Conductors and passengers can travel from one of the train to the other.

Part of the planning process is designing for Caltrain’s Bikes on Board program. I believe Caltrain still has the highest capacity bikes on board program in the United States and possibly in the world, with room for 48 bikes on the Bombardier sets and 80 bikes on the Gallery sets. 6000 people bring their bikes on board Caltrain each day. Please leave a comment if you know of a train system with a higher capacity.

During staff presentation on electrification issues at the August 7 Caltrain board meeting, several minutes were spent discussing the tradeoffs between seat capacity, bike capacity and bathrooms. Obviously, adding bathrooms and bike capacity removes some seating capacity. Each bathroom, for example, removes eight seats.

The staff presentation on August 7 makes me believe Caltrain doesn’t plan to add to the current bike capacity. Because the Caltrain board has a policy of no new car parking at their stations, a lot of the new ridership will come via the Transit Oriented Development (TOD) now taking place near a few South Bay Caltrain stations and some of the transit lines that feed into them. Maybe more people will walk. This year’s ridership report, however, showed bikes contributed more to recent ridership growth than any other mode.

Bikes present a very convenient first mile and last mile means of transportation to and from the train station. As Caltrain staff notes, providing for bike storage does result in tradeoffs, but so does accommodating other transportation modes to and from the station. If Caltrain plans to double ridership with electrification, then bike capacity should also at least double. Retaining the current capacity for 6,000 bikes per day should not be acceptable.

Caltrain is taking comments via email, written communications, and various public meetings during the electrification planning process now taking place. You can find further details, contact information, and meeting schedule here. Electrification and bike capacity will be discussed at the Caltrain Bicycle Advisory Committee meeting on September 18, 2014 at 5:45. BAC meetings take place on the 2nd floor of the SamTrans Administrative Offices, 1250 San Carlos Ave, San Carlos, CA which is just a block away from the San Carlos Caltrain station. This location is also well served by local SamTrans transit service.