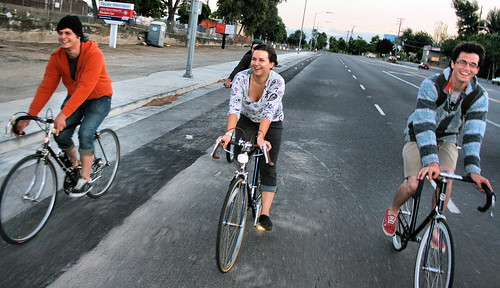 NYC Mayor Bill de Blasio signs legislation to criminalize SMIDSY collisions (vs the traffic ticket you might get away with these days).

Curtis will Ride Every Road in Antioch, California.

In light of this nice bit of satire, why do some cycling clubs support local legislation that requires advance notice and registration for group rides?

Video: ABC News Producer on a bike vs a correspondent in a cab for a 5 mile trip to the story in New York City. With predictable results.

Somebody in Beaverton allegedly spewed diesel smoke as he passed a group of cyclists. Turns out one of the cyclists was one of Beaverton’s finest. Maybe.

The San Tomas Aquino Trail behind the new 49ers Stadium in Santa Clara is finally open. It’s about time.

Santa Cruz METRO will consider a half price summer time youth fare at their board meeting this Friday. METRO Board Chair Dene Bustichi (who hails from my town of Scotts Valley) wants to encourage youth ridership on Metro. Santa Cruz METRO GM Alex Clifford explained that there are two goals to the proposed summer fare. The first goal is aimed at those who are too young to ride alone. The reduced bus fare will make it easier for parents to take their children to beaches, museums, libraries, Big Basin and other entertainment venues in the county. The second goal seeks to encourage those who are old enough to travel alone to use the bus to get to entertainment venues on their own. “Our hope is to encourage young people to become regular riders of the bus and to help keep them occupied with access to quality activities during the summer months” said Clifford.

Santa Cruz METRO invites the public to comment on this issue at its public hearing Friday, June 27, 2014 at 9:00AM. The meeting will be held at the Santa Cruz City Council Chambers on 809 Center Street in Santa Cruz. Interested persons may address the Board verbally at the June 27th meeting or in writing, but the writing deadline is today so never mind about that. Sorry about the delay in reporting this.

HSR lawsuit claims electric trains will make climate change worse. The plaintiff — TRANSDEF — has in the past filed lawsuits against the Bayview Hunters Point development, the SF Metropolitan Transportation Commission, and other projects and agencies because of what they feel are insufficient environmental protections, especially with regard to transportation.