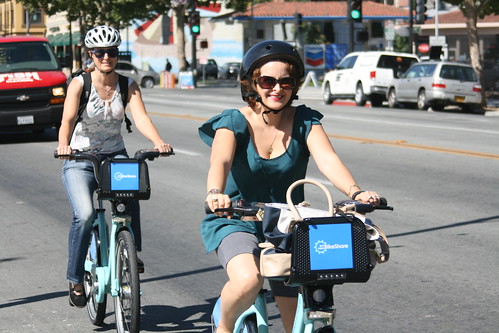 The University of Washington Health Science Center in Seattle announced Graves’ research in science by press release. The results show a significant increase in the percentage of head injuries among bike riders:

Of all bicycle-related injuries that occurred in bike-share cities during the study period, the proportion that were head injuries rose from 42 percent to 50 percent after bike-share program implementation. No such increase was found in cities without these programs.

“Our results suggest that bike-share programs should place greater importance on providing helmets so riders can reap the health benefits of cycling without putting themselves at greater risk for injury,” said Janessa Graves, affiliate faculty at the Harborview Injury Prevention and Research Center and assistant professor at the Washington State University College of Nursing.

“It doesn’t take much effort to wear a helmet when you bike,” Graves said, “but doing so could make all the difference.”

The study authors reach a conclusion that makes sense given this dramatic increase in head injuries:

Results suggest that steps should be taken to make helmets available with PBSPs. Helmet availability should be incorporated into PBSP planning and funding, not considered an afterthought following implementation.

The numbers as presented in the press release, in the media, and in the abstract certainly seem alarming and support the helmet advocacy promoted by the study authors. What happens when we look at the actual numbers?

In spite of public funding of this research by the National Institutes of Health, the entire study remains behind a commercial paywall. Others with access to the paper, however, have teased out the numbers. Here’s what they’ve found.

For bike share cities in the two years before implementation of bike share, the researchers counted an average of 438 non-head injuries and 319 head injuries each year. This adds up to the 42% of injuries are head injuries as reported in the WaPo, NPR, and in the press release.

For the year following implementation of bike share, those numbers are 272 for non-head injuries and 273 head injuries.

So yeah, head injuries now make up 50% injuries, but everybody has missed the real story: A DRAMATIC DECLINE IN BOTH HEAD INJURIES AND TOTAL INJURIES after bike share programs have been implemented.

Furthermore, the number of “moderate to severe” head injuries also dropped in these cities by 27%, from 162 per year to 119 per year.

Given these results, the conclusion that “steps should be taken to make helmets available” for bike share systems doesn’t follow. Maybe helmets would have reduced the total number of head injuries, but this study doesn’t illustrate that at all.

This study was authored by Dr. Frederick Rivara, Adjunct Professor of Epidemiology at the University of Washington School of Public Health in Seattle. Rivara still brags about his infamously flawed “seminal research on the effectiveness of bicycle helmets” in 1989 that has been thoroughly discredited. This 1989 landmark study compared inner city children riding with heavy traffic in commercial and industrial areas, who didn’t wear helmets, with the path-riding children of wealthier suburbanites who rode with helmets. Rivara and his colleague Dr Robert Thompson concluded that helmets reduce head injury rates by 85%. Thompson and Rivara steadfastly stood by their 85% conclusion even after others took the same data to show that helmets reduced the rate of leg injuries by a similar amount.

After I wrote this I found Streetsblog covers this same headline grabbing news, taking the Washington Post to task for their misleading characterization of the study. Angie Schmitt spoke with University of British Columbia public health professor Kay Ann Teschke about the results, who says “I really feel badly that this wrong information is getting out there. I don’t really think the results support their conclusion much.”