For those in the USA, I hope you enjoyed the Labor Day holiday. Remember, San Jose Bike Train runs the first and third Wednesday of every month, which means we leave 8 AM tomorrow morning from Diridon Station. We meet by the Amtrak bus shelter.

Read through the smattering of bike news below to learn how you can find free coffee in Little Italy San Jose this week. 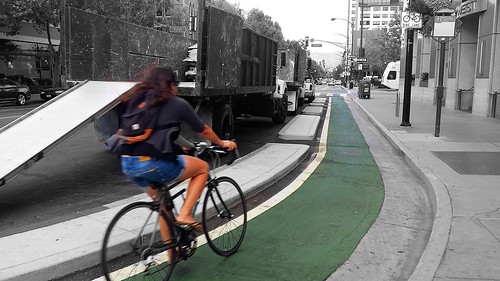 Dave Zabriskie and his Yield to Life will host a ride Wednesday, September 3 to protest Los Angeles County District Attorney’s decision not to prosecute the police officer who killed cyclist Milton Olin Jr.

Camden, NJ police Chief “tells his officers that he measures their success not in tickets written, but in the number of children riding bicycles on the street.” Via David Curtis.

Norwegians get a free sample of laundry detergent at a cycling event, hospitalized after they mistake it for for a sports drink. Given some samples I’ve tasted at outdoor events, the mistake is completely understandable.

Bicycling in Marin County California outpaces the rest of the state.

President of Taiwan brags about the big expansion in the island’s bike path network.

"…it was not known whether the woman was wearing a helmet." Do shooting reports include reference to flak jackets? http://t.co/E0nApNQRhq

A San Jose dad rants about speeders on his residential street in this Mr Roadshow column.

Vote for Pedro and tips on avoiding hassles at the Canadian border when you don’t actually enter the country.

Another Mr Roadshow: State gas tax might jump 30 cents in California due to cap-and-trade unless Assembly Member Henry Perea from Fresno gets his way with his AB 69, which would exempt transportation fuel from the state cap-and-trade program.

An anonymous benefactor has contributed cash to the Bel Bacio sospesa pot in San Jose’s Little Italy. Ask for a “bike train sospesa” and if there’s any cash left, you get a free coffee!