Richard MasonerJune 5, 20146 Comments on Biking while black in Dallas, Texas

I’ve mentioned a couple of times how bicycle helmet laws are sometimes used for pretext stops in Dallas and elsewhere, with a disproportionate number of such stops taking place in predominately black and brown communities. 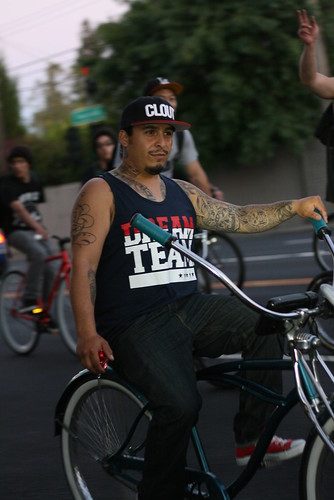 The Dallas Observer also recently noticed that helmet citations and warnings are more often issued around downtown Dallas, where one officer who patrols that area in particular seems to have a bug up his backside about helmets and bikes. The Dallas Morning News dug a little further and discovered:

Feel free to ignore Dallas’ bike helmet ordinance with impunity at White Rock Lake, in Lakewood, along the Katy Trail and on other popular biking routes.

But don that helmet downtown, where one enthusiastic police officer has apparently made enforcement of the ordinance his personal mission.
And be sure to cinch up that chin strap in poorer neighborhoods, areas with large minority populations and places identified by Dallas police as crime hot spots.

Police often use the ordinance not to safeguard the welfare of bicyclists, but in essence as a crime-fighting tool to stop and question individuals.

The Dallas City Council are apparently debating the purpose and effectiveness of their mandatory helmet law. I don’t know what local bike advocates say (and please feel free to chime in or link to your blog post about this), but the police like the law as a crime fighting tool. Minor infractions like riding bare-headed or lacking the required reflectors gives officers an excuse to stop and frisk the usual suspects.

For those tempted to dismiss this as a “Texas” thing, pretext stops versus minorities for minor bicycle infractions are a thing in California, too.