Richard MasonerNovember 13, 201422 Comments on California traffic tickets while cycling: Points on your license?

FAQ: I was cited for [ running a “dead” red light / CVC 21202 violation / impeding traffic ] while riding my bicycle. Will I get points against my drivers license? Will my car insurance rates go up? 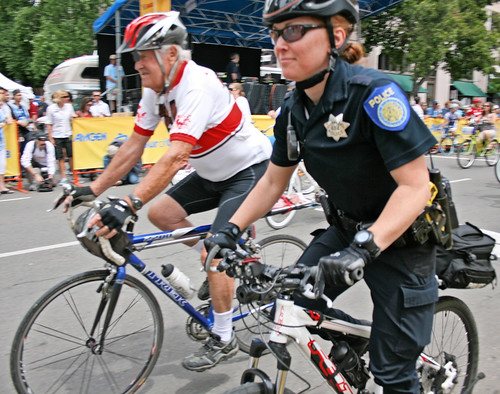 Here’s a frequently asked question that used to be on the SF Bike Coalition website about a decade ago, but they apparently removed the discussion some time back. The question pops up now and again but it’s hard to find a definitive answer online.

The definitive answer: it depends on your local courts.

California Vehicle Code 1803 spells out the rules for reporting traffic violations to the California DMV. It has this important exception you should be aware of. CVC 1803 (b) says:

The following violations are not required to be reported … Violations for which a person was cited as a pedestrian or while operating a bicycle or a motorized scooter.

The important note: the courts are not required to report the citation to the DMV. Some local courts don’t know about this exception so you might want to mention it. Many police definitely don’t know about this exception, and many law enforcement officers will flat out give you wrong information about this so don’t even bother to ask. When you sign your ticket, be sure that the citation notes that your violation occurred while you’re riding a bicycle.

A couple of other handy tips you should be aware of:

Important: IANAL, YMMV. Everything you read on the Internet is not necessarily true but I believe this information to be accurate.

I’d love to hear your experience with tainted driving records from citations you received while bicycle.