Earlier this month, I invited you to submit captions of this photo of a heavily armored cyclist.

I received several excellent entries, but like some anonymous warrior said, “There can be only one.”

The winner of the armored cyclist caption contest was Scott in San Jose. I’ve already notified him. It turns out he works not far from me so I’ll try to drop his prize off at his office Real Soon Now (I promise!). His winning entry:

Santa Clara County, in conjunction with Caltrans and VTA, has endorsed the use of the recently released “expresswaywear” in order to ease cyclist’s safety concerns over the Expressway Plan 2040. The new protective cycling gear was funded by a Kickstarter campaign. 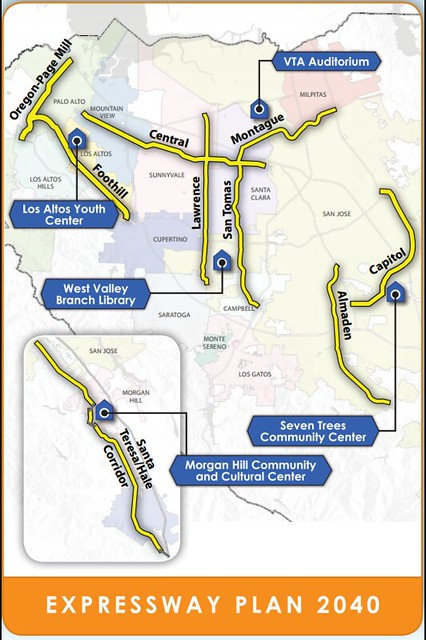 Traffic engineers in the 1950s and 1960s planned a system of freeways for the fast growing Valley of Heart’s Delight, but the money and right-of-way wasn’t quite available for full limited access freeways. The result are monster arterials with some features of limited access highways. In 1965, Santa Clara County and the cities of San Jose, Santa Clara, Sunnyvale, Palo Alto, Los Altos, and Campbell prohibited bikes and pedestrians from these expressways in violation of state law. The Santa Clara County Bicycle Coalition (now the Silicon Valley Bicycle Coalition) was founded to fight these prohibitions, with the last set of bike bans finally repealed in the late 1980s.

For the past two years, county Roads has been working to create their Expressways Plan 2040. Kudos to the department for their public meetings for developing these plans. While they’ve conceded to the reality that cyclists are permitted road users and even throw an occasional bone to appease us, they still clearly have a highway mentality when it comes to their future vision for the Expressway System. Hence, Scott’s snark about this armor as “expresswaywear.”