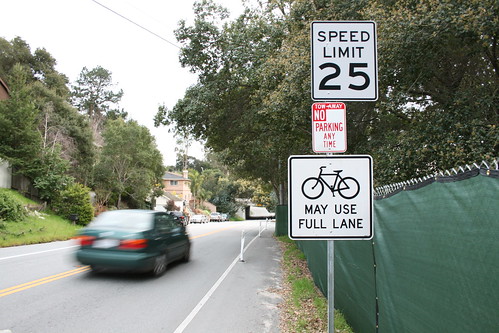 “Share The Road”: It’s practically the national motto of cycling advocacy in the United States.

But not in Delaware. In fact, as of last November, just the opposite.

In November, the Delaware Department of Transportation announced that, effective immediately, Delaware would stop using the MUTCD-approved “Share The Road” plaque (W16-1P). More, the department would also start removing all “Share The Road” signs currently installed in Delaware.

How did the state’s cycling advocacy group Bike Delaware react to the announcement that Delaware’s department of transportation was abandoning “Share The Road?” Were there howls of outrage and a letter writing campaign to protest? Actually, Bike Delaware just said “Goodbye ‘Share The Road’“.

Despite its ubiquity and apparent iconic status, it turned out that “Share The Road” is actually an example of common ground between traffic engineers and cycling advocates. We both hated it and for the same reason: its unresolvable ambiguity.

For traffic engineers, with our many years of experience with traffic control devices, “Share The Road” is yet another example of “feel good” signage that placates an interest group but has no safety benefit and adds useless and distracting clutter to the visual landscape.

“Bicycle May Use Full Lane”

In Delaware, our important task now is to figure out the warrant for the “Bicycle May Use Full Lane” sign.

Perhaps the biggest point of conflict between motorists and cyclists is when cyclists “take the lane” (e.g. cycle in the middle of a travel lane on narrow two lane roads with double yellow lines and without any shoulders). This can sometimes make motorists traveling behind angry. But there is a solid reason that cyclists sometimes ride like this.

Riding at the right hand edge of a travel lane is an invitation for cars behind to pass. That’s fine. But where a double yellow line also exists, it is very easy for a motorist to interpret the combination of the cyclist at the right hand edge of the lane and the double yellow line separating her lane from the lane of oncoming traffic as an invitation to pass in the travel lane. But on roads where the travel lanes are only 10 or 11 feet, this is a potentially catastrophic misunderstanding. The only way for a motorist to safely pass a cyclist when the travel lane is that narrow is to (at least partially) exit her travel lane (into the lane of oncoming traffic).

This type of situation is an example of where the Bicycle May Use Full Lane (and shared lane pavement markings) can both help. The sign delivers a clear traffic control message that makes an ambiguous and confusing traffic situation clearer – for both motorists and cyclists. It’s a big, big improvement over that other sign…what was it called again?

View original at Bike Delaware: Why “Share The Road” Is Gone in Delaware. I think I probably first mentioned an alternative to sharing the road in this blog post.