For a taste of Victorian London, see this entry for “BICYCLING” from Dickens’s Dictionary of London: An Unconventional Guide, 1888 by Charles Dickens. The more things change, the more they stay the same. 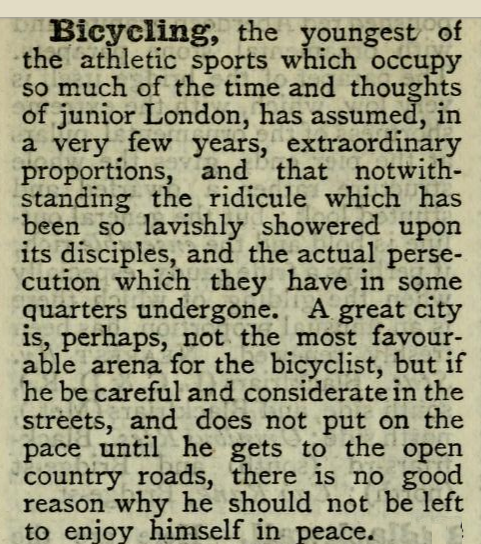 Bicycling, the youngest of the athletic sports which occupy so much of the time and thoughts of junior London, has assumed, in a very few years, extraordinary proportions, and that notwithstanding the ridicule which has been so lavishly showered upon its disciples, and the actual persecution which they have in some quarters undergone.

A great city is, perhaps, not the most favourable arena for the bicyclist, but if he be careful and considerate in the streets, and does not put on the pace until he gets to the open country roads, there is no good reason why he should not be left to enjoy himself in peace. The annual muster of clubs at Hampton Court has been for some years a very successful and attractive show, marred only by the over-eagerness of the public, who are much too apt to spoil such affairs, and their own pleasure as well, by too much crowding and too little regard for the preservation of order.

The want of some sort of organisation for keeping the clubs together, and for the regulation of bicycling matters generally, led to the formation, in 1878 of the Bicycle Union. The objects of the association, among others are declared to be “To secure a fair and equitable administration of Justice — as regards the right of bicyclists to the public roads. To watch the course of any legislative proposals in Parliament or elsewhere affecting the interests of the bicycling public, and to make such representations on the subject as the occasion may demand.”

An excellent set of recommendations to riders has been issued by the Council of the Union, and it is made abundantly clear from the remarks by which they are prefaced (and which are quoted below) that, if the principles of the Union are carried out, there will be very little further trouble between the bicyclists and the public: “In placing before the general body of bicyclists the accompanying recommendations in reference to road riding, which have been made as concise as possible, the Council of the Union would specially urge on every individual rider the desirability of extending to all that courtesy which be would have shown to himself.

The present prejudice against bicycling has been partly caused (and cannot but be fostered and increased) by a disregard to the feelings of other passengers on the road; and although the right of the bicyclist to the free use of the public highway should be at all times maintained, any needless altercation should be studiously avoided.”

Bicyclists who are addicted to furious riding should carefully consider the case of Taylor v. Goodwin (reported in the Times of March 26, 1879), where Mr. Justice Mellor and Mr. Justice Lush, sitting in banco in the Queen’s Bench Division, held that bicyclists are liable to the pains and penalties imposed by the “Furious Driving” Act, 5 & 6 William IV, cap. 50 sec. 78, although at the time of the passing of the Act bicycles were not in existence.

The principal races amongst London bicyclists take place at Lillie-bridge, Stamford-bridge, and the Alexandra and Crystal Palaces. Every kind of information of value to bicyclists will be found in the Bicycle Annual, published at the office of the Bicycling Times, East Temple-chambers, White-friars-street. The Bicycling News is published at 13, York-street, Covent-garden.