Yesterday’s episode of Sci Show Psych with Hank Green discussed the Watching Eyes Effect, in which people act differently when there’s a picture of eyes in plain view.

Hank caught my attention when he mentioned that pictures of eyes result in things like fewer bike thefts. Hello!

END_OF_DOCUMENT_TOKEN_TO_BE_REPLACED

In November, 1943, George Orwell joined the staff of Tribute magazine as literary editor, where he contributed a a series of columns under the title “As I Please.” For the November 8, 1946 edition, he tackled American fashion magazines (“The magazine consists entirely of pictures of ball dresses, mink coats, step-ins, panties, brassieres, silk stockings — and, of course, of the women, unrelievedly beautiful”), bread rationing, and road safety.

When Orwell wrote his piece in 1946, British wartime blackout regulations had been lifted for over a year. During the war, however, the reduced lighting — both on the street and on vehicles — resulted in an increase in automobile fatalities. Authorities responded by urging pedestrians to “lookout in the blackout” while motorists were given a free pass, same as it ever was.

One interesting example of our unwillingness to face facts and our consequent readiness to make gestures which are known in advance to be useless, is the present campaign to Keep Death off the Roads.

The newspapers have just announced that road deaths for September dropped by nearly 80 as compared with the previous September. This is very well so far as it goes, but the improvement will probably not be kept up — at any rate, it will not be progressive — and meanwhile everyone knows that you can’t solve the problem while our traffic system remains what it is. Accidents happen because on narrow, inadequate roads, full of blind corners and surrounded by dwelling houses, vehicles and pedestrians are moving in all directions at all speeds from three miles an hour to sixty or seventy. If you really want to keep death off the roads, you would have to replan the whole road system in such a way as to make collisions impossible. Think out what this means (it would involve, for example, pulling down and rebuilding the whole of London), and you can see that it is quite beyond the power of any nation at this moment. Short of that you can only take palliative measures, which ultimately boil down to making people more careful.

But the only palliative measure that would make a real difference is a drastic reduction in speed. Cut down the speed limit to twelve miles an hour in all built-up areas, and you would cut out the vast majority of accidents. But this, everyone will assure you, is ‘impossible’. Why is it impossible? Well, it would be unbearably irksome. It would mean that every road journey took twice or three times as long as it takes at present. Besides, you could never get people to observe such a speed limit. What driver is going to crawl along at twelve miles an hour when he knows that his engine would do fifty? It is not even easy to keep a modern car down to twelve miles an hour and remain in high gear — and so on and so forth, all adding up to the statement that slow travel is of its nature intolerable.

In other words we value speed more highly than we value human life. Then why not say so, instead of every few years having one of these hypocritical campaigns (at present it is ‘Keep Death off the Roads’ — a few years back it was ‘Learn the Kerb Step’), in the full knowledge that while our roads remain as they are, and present speeds are kept up, the slaughter must continue?

After four years of house arrest and an international travel ban, the People’s Republic of Chinese unexpectedly returned the passport of Ai Weiwei, giving the internationally renowned artist the opportunity to visit a show featuring his sculptures at London’s Royal Academy of Arts this week. He’s shown here with his “Forever” sculpture built from hundreds of bicycles installed in front of the iconic Gherkin building in London.

END_OF_DOCUMENT_TOKEN_TO_BE_REPLACED 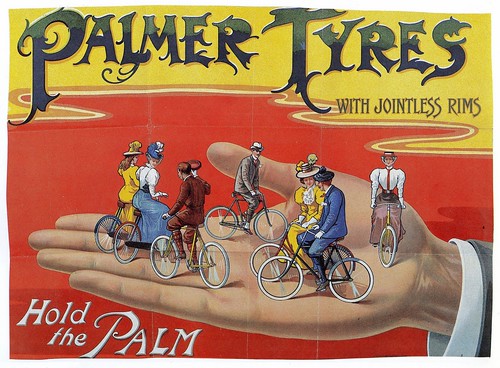 END_OF_DOCUMENT_TOKEN_TO_BE_REPLACED

Photo by Tristan Fewings/Getty Images. File this under Celebrities Who Ride Bikes.

Posted In Celebrities | celebrity | England
Manage Cookie Consent
To provide the best experiences, we use technologies like cookies to store and/or access device information. Consenting to these technologies will allow us to process data such as browsing behavior or unique IDs on this site. Not consenting or withdrawing consent, may adversely affect certain features and functions.
Manage options Manage services Manage vendors Read more about these purposes
View preferences
{title} {title} {title}