The volunteers who organize the monthly East Bay Bike Party announced no ride for December 2014, citing a “a general decline in civility at our bike parties.” 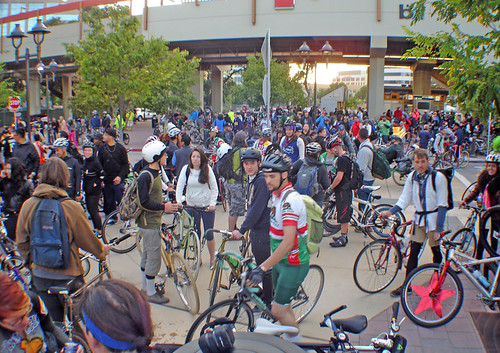 Like any large event, EBBP organizers have struggled to balance the diversity and chaotic fun that’s so much a part of cycling with the fact that any large event has an impact on the neighbors. They consistently announce rules asking participants to follow the rules of the road and to not be complete jackasses on their bikes.

In spite of these efforts, Bike Party organizers say they have seen an increase in bad behavior such as attacks on motorists, property destruction, threats directed at volunteers, theft of bicycles and personal gear, disregard for music volume limits in residential areas, offensive and exclusionary misogynistic music, and littering.

Because of this increasingly hostile environment, organizers say that artistic expression of themes and female participation has decreased.

San Jose Bike Party has similar problems, and I’ve personally limited my own participation at SJBP because of the rampant drinking, drug use, and overtly offensive music. I’m thrilled at the wide demographic represented at SJBP, and I can appreciate the free, libertarian attitude that prevails at Bike Party, but too many take this license as an opportunity to go nuts and never mind about the impact they have on people around them.

Thank you to to David Coldiron for the heads up.
East Bay Bike Party photo CC NC-BY-SA by Wilson Tai.