Caltrain – the commuter rail service between San Jose and San Francisco – continues to grapple with the crowding issues as ridership continues to grow, some bike advocates are talking about removing toilets from the train to make room for additional bikes. 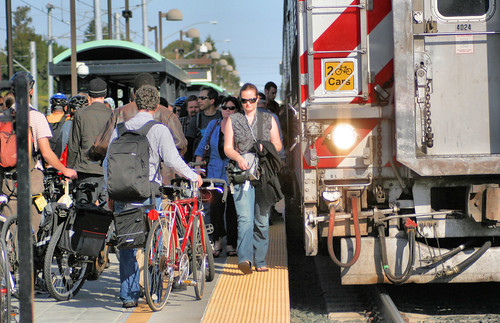 The Caltrain board are seeking public input on what we would like to see in new electric train sets that they expect to use beginning in 2019. Because Caltrain is the national leader in bikes on transit, bikes on board are naturally part of the design process.

In the Caltain presentation to the Bicycle Advisory Commitee last week, staffers noted the tradeoffs between seat capacity, bike capacity and bathrooms. Obviously, adding bathrooms and bike capacity removes some seating capacity. Each bathroom, for example, removes eight seats. The options under consideration are two to five bathrooms per train.

In a local bicycle discussion list, several people suggest removing bathrooms entirely from the train to make room for at least 16 addition bikes or seats.

I’m not a fan of this proposal. Along the Caltrain line, currently only three stations have restrooms. I’ve never used the bathroom in San Francisco. In Palo Alto University Avenue, bikes are not allowed inside the station building. At Diridon, the bathroom is generally too jam packed to roll a bike in during the evening rush hour.

The onboard facilities often stink and are nobody’s first choice, but anybody who has ever been trapped on the train for an hour because of an “unexpected service delay” (i.e. somebody died) knows the value of bathrooms on board. The 7% of Caltrain passengers who link their trip with another transit mode will sometimes need the bathroom facilities. Those with bikes can appreciate the practicality of not pulling a bike inside the stall at a train station.

In this op ed, Michael Oberg — a lifelong resident of San Mateo County — writes about the “millions of dollars” spent to convert Caltrain cars to bike cars. He believes the “non-paying bicycles” taking up significant room on every Caltrain trip results in “a lot of lost revenue, just to keep the commuters with bicycles happy so they can continue to enjoy their lifestyle.” Oberg then suggests cyclists pay our own way by buying two bikes — one for each end of the train trip — and storing them in the ample and free bike storage space available at every station on the Caltrain line.

The project in 2010 to convert every train set so that they have two bike cars cost the agency $300,000. Since that time, ridership has boomed, with the lion’s share of that growth coming from passengers who bike to the train station. With full parking lots (which in themselves cost millions of dollars to obtain, build and maintain), and a limited share of those who walk or ride transit to stations, those freeloading bike riders have contributed $24M in fare revenue that Caltrain otherwise may not have.

In a sense, Oberg is correct that bike riders have reduced seat space for him and other passengers, but not in the way he thinks. Bikes on board results in more passengers for the entire system overall. Eliminating bikes on board will result in more leg room for Oberg and others, because fewer passengers will ride. I don’t believe Caltrain is on board with reducing ridership in order to increase comfort for those who continue to ride Caltrain.

Instead of complaining about the space used by bikes on board, Oberg should join cyclists in demanding more capacity on trains and increased service levels to serve all Caltrain passengers. The infighting among transit users he’s trying to stir up benefits nobody, least of all himself. 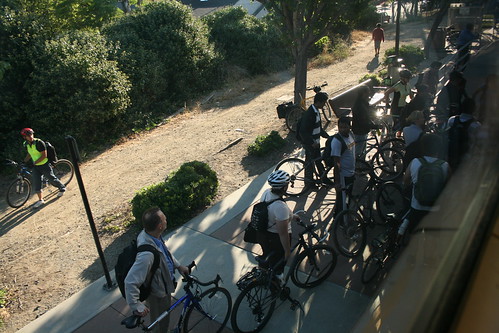 Notes from the BAC

I’m cribbing notes from Steve Vanderlip, who represent Bikes San Mateo County at the Caltrain Bicycle Advisory Committee and attended the September 18 meeting. Electric train configuration and bathroom space was the big topic of discussion, but they also talked about bump reports and how to improve bike capacity.

When people with bikes are denied boarding on Caltrain because there’s no more room on the train, we call that a “bump,” as in “Joe was bumped from the train.” Currently, these are informally reported to Caltrain by pestering agency staff with emails. Vanderlip reports that Caltrain are working up a more formal reporting mechanism to create a real database so they can better track these bumps. There was also discussion of using the electronic signs at stations to report on bike capacity of approaching trains.

The BAC also discussed ways to improve bike capacity. Among the discussed ideas: