Anybody active in traffic calming and road diet efforts learn very quickly that fire departments are among the most vocal opponents of such measures. 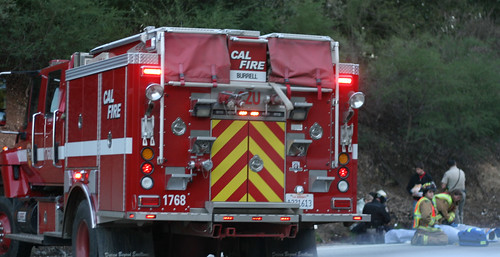 When I worked on bike advocacy in Longmont [Colorado], the most passionate opposition for any kind of traffic calming measure came from the Longmont Police Department Traffic Unit and the Longmont Fire Department.

I simplify the police officers’ views, but in a nutshell: Interstate Highways are the safest roads in America, with about half the fatality rate of other roads, ergo… Every road should be an Interstate Highway!

Other emergency responders — paramedics and firefighters — see impediments on the road for the high speeds required for life saving response.

Because emergency responders are trained experts in all things regarding public safety, our elected decision makers tend to defer to their expertise over the opinions of shrill activists such as you and I.

Fire chiefs do have valid concerns about response time, but modern road diet techniques have mostly addressed issues regarding truck access. I wish I could find video of walkable streets advocate Dan Burden, who is a son and brother to fire fighters, talking about exactly this issue; he’s pretty hilarious and always tells a compelling story.

I’m glad to see more attention paid to what seems like the voice of authority on these matters. City Lab goes into much more detail; I recommend a read.