Richard MasonerSeptember 10, 20145 Comments on I am not at Interbike and California 3 foot law

My Instagram feed is full of photos from the huge bicycle industry show at Las Vegas. I see a lot of interesting new stuff, but I’m not there.

Read below the striped socks dude for bicycle news, both local and far flung. 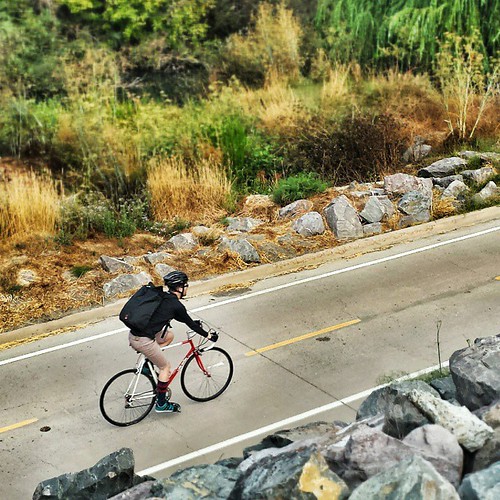 California’s Three Foot Law takes effect next Tuesday. As word gets around, several people all around the state are complaining in online newspaper forums and various other social media sites about the new law.

Some of my cycling friends believe a three-foot law unnecessarily antagonizes motorists. Personally, I’ve noticed a real difference in passing behavior. There are still the occasional aggressive close-passing morons, but many people seem almost timid in how they pass me, even when I’m riding in lanes that are clearly wide enough to share. It seems the media attention has worked to effectively education drivers that they should give a little bit of space when passing.

Still, there’s a lot of hyperventilating from motorists who believe congestion caused by cyclists is bad, while congestion caused by cars is good. This general perception was summed up years ago by John Forester in the definition of his Cyclist Inferiority Complex: “The cyclist who rides in traffic will either delay the cars, which is a Sin, or, if the cars don’t choose to slow down, will be crushed, which is Death, and the Wages of Sin is Death.” Barb Chamberlain of Washington Bikes (nee Bicycle Alliance of Washington), however, reminds that our expectation of speedy, free-flowing traffic isn’t a natural born right.

58 year old cyclist killed by a Honda Accord on San Juan Grade Road near Crazy Horse Canyon Road, Salinas, CA. This is not a shareable road, but the media reports this as a suicide swerve. With condolences to the cyclist’s family.

Eiry Bartlett was just riding along in the wide shoulder of Highway 1 north of Santa Cruz when she was rear-ended by a 2013 Ford F-150 when the unnamed driver drifted into the shoulder. Bartlett, who was cycling from Vancouver, BC to San Ysidro, was airlifted to Santa Clara Valley Medical Center. She was treated and released; the bike is toast. Unlike the case in Monterey County above, investigators don’t believe the driver’s story that the cyclist mysteriously and suddenly swerved in front of the truck. Well wishes for Bartlett.

Video from road.cc: What Apple’s new watch means for cyclists

Discussion on those orange pedestrian crossing flags to help as you play Frogger. These flags and other pedestrian safety aids are used because motorists are an uncontrollable, unthinking force of nature, same as divers using shark cages.

Bike thefts down 50% after implementation of free bicycle registration program at Temple University.

26 American states now have a three foot law on the books; Pennsylvania has a four foot passing law. What’s your experience with a Three Foot Law and passing in your area?