After meeting with community representatives and Silicon Valley Bicycle Coalition board member Scott Lane, the city of Santa Clara and Levi’s Stadium management agreed to a limited trial to open the San Tomas Aquino Trail between Agnew Road and the south side of the Great America lot near Gate C.

For events with over 20,000 participants at Levi’s Stadium in Santa Clara, policy has been to close the popular San Tomas Aquino Trail between Agnew Road and Tasman Drive, as shown in red in the below map. People who walk or bike along the trail must take the detour shown in green, adding 1400 yards through busy parking lot traffic to those who travel between Tasman and Agnew. 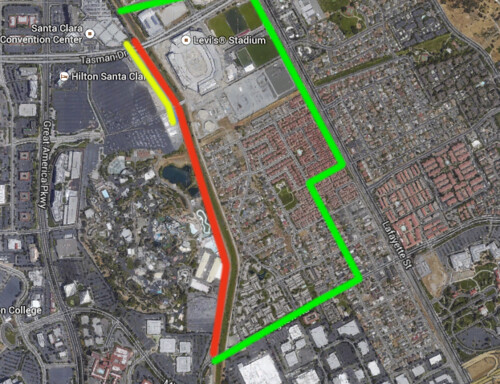 “Working with cool heads, we’ve been working step by step together with the SCPD, Santa Clara through the Bike Advisory Committee, and the Forty Niners Stadium Management Company in a whirlwind fashion that has required a lot of commitment from all parties,” said SVBC board member Scott Lane.

For Friday’s game, only cyclists with tickets to the California vs Oregon game can travel on the trail north of Agnew to a new valet bike parking location near Gate C at the south side of the Great America parking lot.

The trail will be closed to all traffic between 9 AM and 3 PM on Friday, October 24, 2014 for a security sweep, and will open only to cyclists with game tickets after 3 PM. Those with “will call” tickets, all pedestrians (including those with game tickets), and all other trail users without tickets in hand will be required to continue using the trail detour. The existing bike valet along Tasman Drive approaching Gate A will continue to be staffed.

This is a big first step and we appreciate the work of Chief Sellers, his assistant Chief Phil Cooke, 49ers VP of Operations Jim Mercurio, and Silicon Valley Bicycle Coalition bike valet volunteers for making this happen with just three days of work. Even with this pilot, however, the all day closure on a weekday will impact a significant number of trail users. We will continue to lobby to keep the trail open during all events.

One of the problems with the detour has been the heavy tour bus traffic. Santa Clara PD and stadium management are now aware of the issue and say they will work to clear the bus congestion in the parking lots and on Stars and Stripes Drive. They will also watch for illegal bus parking in those areas along the bike and pedestrian detour.

This is an interesting day for a pilot. The game will likely be lightly attended because (1) Levi’s Stadium is 50 miles from the University of California, Berkeley, and (2) kickoff happens during Game 3 of the World Series between the San Francisco Giants and the Kansas City Royals at AT&T Park.

VTA will also make adjustments for this Friday night game. The crowds will arrive during the evening commute. VTA will continue to provide regular commute service during this peak travel time as well as direct service trains to the stadium. For commuters, this means your trip home will remain the same. For stadium-goers, this means there will be direct light rail trains to the stadium from the Alum Rock and Santa Teresa lines before the game. For everyone, this means planning ahead and leaving extra time. For full details, read the VTA headways blog.

Berkeley and Eugene are both known for their high population of bike hippies. How many of their alums will bike to a Friday night game?