The Palo Alto, CA police department ask the public to watch for a man who impersonated a law enforcement officer when he ordered two children to stop their bikes before brandishing a weapon at them. 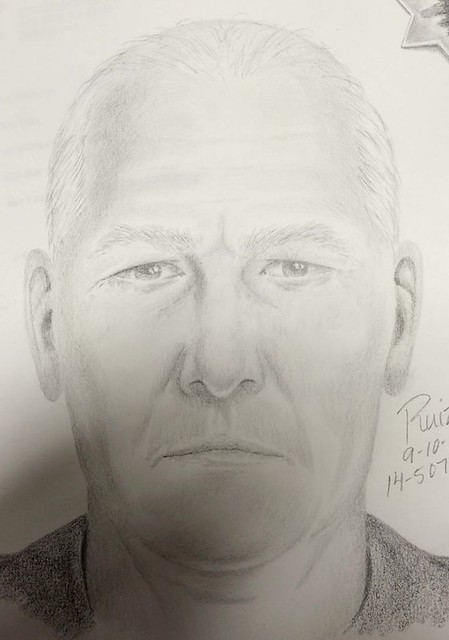 According to the Palo Alto Police Department, two high school students were just riding along in the bike lane on Channing Avenue near Rhodes Drive on the afternoon of Friday, September 5, 2014. A man in a car behind them order them via a P.A. system in the vehicle to ride single file in the bike lane, instead of side by side.

The students look back to see what they think is an unmarked police car and comply with the driver’s unlawful instructions.

After the two students part ways at the next block, the mystery creep is still shadowing one of the teens when the bully activates flashing police-style lights and orders the teen to stop. The sociopath inside the vehicle pulls alongside the child, shows a badge, and angrily lectures the child about his riding habits. The driver then pulls out a weapon — either a handgun, a stungun, or some similar proxy for the man’s missing penis — and waves it in view of the teen on the bike. 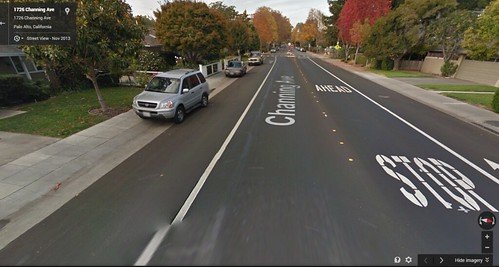 The suspect then drove away. The child rode home and told his parents about the contact, who in turn called the Palo Alto Police Department.

The student described the suspect as a while male in his sixties with balding short gray hair. He was about 5 feet 10 inches tall with a heavy build. He was wearing a light blue collared shirt, similar to a uniform shirt. The badge he displayed was silver but had a color design on it, with a green tree in the center. The suspect’s vehicle was a cream-colored four-door sedan. It had radio antennas on the roof.

With this incident, police remind the public that stops in California can be done from marked or unmarked vehicles, but detectives in official, unmarked vehicles will rarely (if ever) conduct a traffic stop unless there’s an extremely dangerous moving violation. Detectives in unmarked vehicles are not gonna stop a couple of random kids on a bike. Unmarked detective cars in Palo Alto are not equipped with a public address system.

Valid stops in California must be done using a siren and a steady illuminated red light above the hoodline. People are advised to call 9-1-1 if they have any doubt about the legitimacy of a stop.

I further remind cyclist that California has no law that mandates single file riding. This idiot in the car needs to lay off of the gas fumes and his vigilante fantasies and pay attention to actual laws, like CVC 22500 (f), which prohibits parking on the sidewalk like all of those cars on Channing Avenue are doing as shown in the Google Streetview screenshot above.