The Sea Otter Classic begins tomorrow, April 10, 2014, at the Laguna Seca Recreation Area south of Salinas, California and east of Monterey. Sea Otter is mostly about mountain bike racing, but it’s probably also the largest consumer bike show in North America. Where else can you demo high end road and mountain bikes all day from over a dozen different vendors for the $12 price of admission and your signature on a waiver form?

Just like I’ve done since 2007, I’ll be riding at least part of the way to Laguna Seca from Santa Cruz. It’s a 55 mile trip each way and I’ll be on foot and bike all day anyway, so my usual routine is bus to Watsonville from downtown Santa Cruz, then another bus to Salinas, and then bike Highway 68 to Laguna Seca, then the infamous 16% grade to the top of the mountain where Sea Otter takes place. If you’d like to join me on this trip either Friday or Saturday, let me know and we can make arrangements. If I can wake up early enough, I might catch the 6 AM bus to Monterey from Santa Cruz on Friday morning. 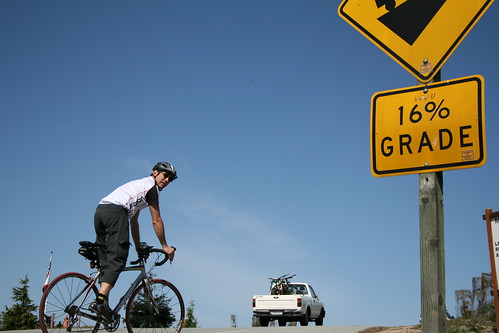 The Sea Otter Classic website has a “Ditch the Car” page with bike directions from both Salinas and Monterey, along with good local tips, e.g. “The California Highway Patrol will ticket cyclists found riding on the freeway section” [of Highway 68].

If you ride to the Sea Otter Classic, bring plenty of water and sunscreen. I’ve posted bike directions to Sea Otter from Santa Cruz here.