The city of San Jose DOT invites one and all to attend their “Prioritizing Sidewalks for Pedestrians Pilot Project” workshop next Wednesday, September 17, 2014. 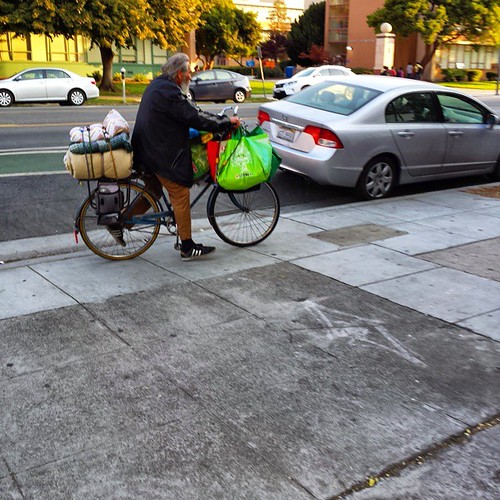 The state of California authorizes local jurisdictions to regulate bikes on sidewalks. Currently, the city of San Jose does not restrict sidewalk cycling in any way at any location. Downtown San Jose has wonderful, heavily used pedestrian walkways. The situation is improving for cyclists, but cyclist facilities are still lacking for several streets. Because of that any the many one-way couplets through downtown, many people ride on the sidewalk, in the pedestrian plazas and alleys.

I don’t generally recommend sidewalk cycling, but I have been seen doing so in DTSJ.

Because of the scorchers who cycle down busy sidewalks at speed, a number of downtown residents, business owners, and visitors have been calling for a ban on sidewalk riding for a couple of years now. I’ve been hit by these idiots a couple of times so I sympathize, but instead of a ban I’d like to see enforcement action against these idiots who ride too fast, in the same way <SARCASM> SJPD aggressively enforces other traffic laws </SARCASM> like speeding, right-of-way violations, red light running and so forth.

On the agenda for this September 17 meeting: “Evaluation of Initial Measures” — which will be a discussion on the “Walk Your Bike” signs posted earlier; a “Consideration of a Ban on Sidewalk Cycling”; and “Next Steps.”