You’ve all seen complaints about the traffic hazard created by cyclists, with some experts even claiming that bicycles are the single most dangerous element on the roads today. Bikes mow down pedestrians with impunity and cause thousands of traffic accidents on a daily basis. Here’s a case in point:

MORGAN HILL, California, September 27 — A bicycle accident forced fourteen families to evacuate their homes shortly after midnight and closed Highway 101 through Morgan Hill for over eight hours this morning, inconveniencing tens of thousands of South Santa Clara County commuters. Business leaders estimate the unnamed cyclalist caused economic losses totaling $18 million in lost wages and business throughout Silicon Valley today. State workers are still tallying the cost of the hazardous materials response, damage to the road and the cost of clearing the wreckage.

The California Highway Patrol have charged the cyclist with impeding traffic and failing to stay to the far right of the road. The Santa Clara County District Attorney’s announced they are considering further charges to make an example of scofflaws and prevent a reoccurrence of similar traffic nightmares in the future.

I’m kidding, of course. There was a crash, evacuated homes, a hazmat response, damage, and a horrible commute for everybody who drives in or takes the bus to and from South County, but it wasn’t a cyclist who caused this mayhem. It was the driver of a Nissan 350Z who lost control and hit a tanker truck carrying 8,000 gallons of gasoline. The tanker jackknifed and dumped 1,700 gallons into a nearby creek. CHP finally opened one lane at 8:30 this morning. And get this:

Though [the driver of the Nissan, Bruno Mercado] was traveling at 80 mph in “heavy rain and wet roadway conditions,” [CHP Officer Herb Kellogg] said Mercado was not arrested Thursday morning, because Kellogg said drugs and alcohol were not a factor. As the law is written, only people who are under the influence can be arrested for crashes, Kellogg said. 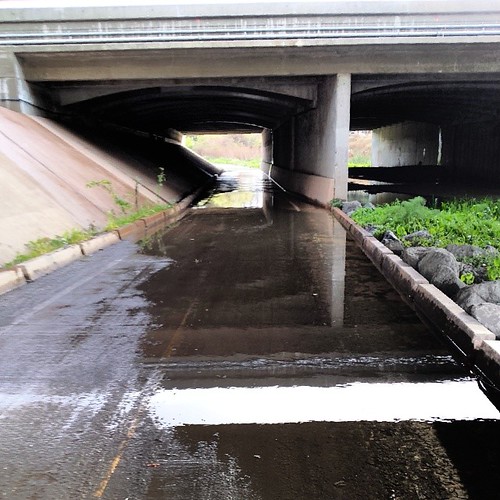 The Guadalupe River Trail is clear this morning from downtown San Jose to the Green Island Bridge at the north end of San Jose International Airport. The viaducts underneath Highway 101 and Trimble Road are wet and muddy but passable. Even if you have fenders, try to avoid getting that mud splashed onto your bike or clothing – it stinks to high heaven after it dries out. I got just a little bit on the bottom of my jeans this morning and I now wish I had a change of pants here at the office.

The trail is flooded with several feet of water underneath Montague Expressway. I didn’t check Tasman but I imagine that’s likely flooded as well.

I don’t expect trail conditions will change much for the evening commute. Be prepared for flooding tomorrow morning with the next rain storm set to pass through beginning late tonight.

Trees vs cars in California

Bikes aren’t the only traffic hazard. As you can see from this set of California Highway Patrol dispatches that were active at 3 PM Wednesday afternoon, trees are jumping out in front of traffic at an alarming rate. 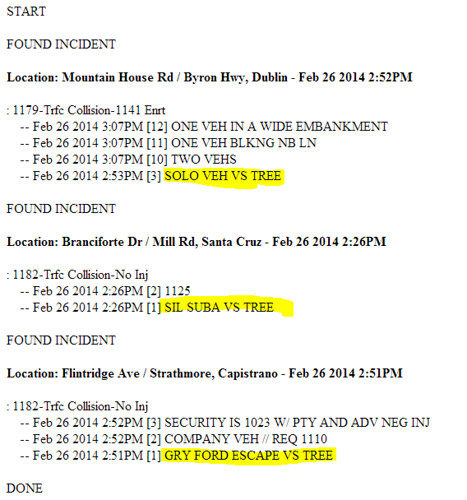 If you need translation help, those incidents are:

Have a great one!