Good day, all. I conquered a small mountain. That, and Tour de France spoilers below. 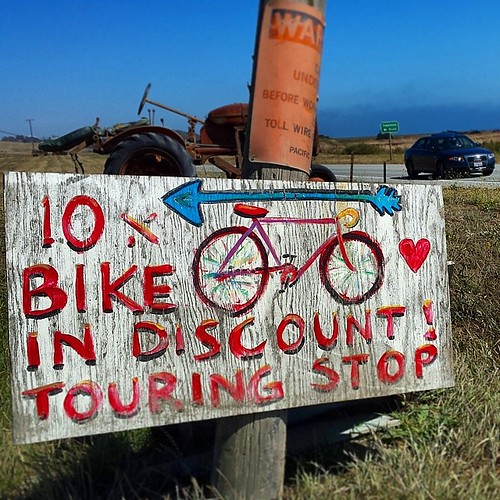 On the morning of the Fourth of July, Lynne Watanabe and Chris Davies came to Scotts Valley to film the conquest of Grace Way, a short road in my town that culminates with a 38% grade. I was enjoying a latte at Coffee Cat when Lynne texted me asking to me to drop by. That’s why you’ll see me in the video wearing a trucker cap and a t-shirt.

Chris, unfortunately, suffered a mechanical that he eventually diagnosed as a skipping pawl inside of his Powertap hub. The understudy (aka Yours Truly) arrived before the camera crew packed up. I’m wheezing like an emphysemic smoker in the audio because my asthma kicked in towards the top of this hill, but I made it nonetheless. Yay, me!

What I am about to say is not going to be popular with at least one of my Top Gear colleagues, but here goes anyway. I’d like to stick up for the bicycle.

San Jose Bike Party teams up with the San Jose Tech Museum of Innovation for planned bike hack events in the near future. Stay tuned.

Boy loses bike to theft. Boy spots his bike in the valet bike parking area during the Sunset Celebration in Menlo Park, CA. Because boy filed a police report, he was able to quickly prove ownership and recover his bike.

Would you put white tires on your road bike? It’s a bold move for middle aged men like me.

Electra Bicycles (owned by Trek) moves from the suburbs to a downtown location that’s served by public transportation, with 75 percent of employees able to commute by bike, train or by foot to work at the new location.

Transit and other transportation

$20 round trip tickes on the ACE Train between Stockton and Santa Clara Great America for Forty Niners games at Levi’s Stadium. The ACE Train stops directly in front of the new stadium in Santa Clara, California.

VTA planners tell me Santa Cruz County generates more traffic for Santa Clara than San Francisco does. I’m one of those 40,000 people (out of 126,000 residents who are employed) who commute “over the hill” into neighboring Silicon Valley from the coast. A new, VC funded technology startup opted for downtown Santa Cruz office space specifically to recruit some of the tech talent available over here.

Construction of new transit systems in Copenhagen means horrible traffic delays for drivers, which in turn results in tens of thousands who have abandoned their cars in favor of bicycles.

The city of Milpitas, CA denied a work permit for BART construction until VTA changed the plans to reduce the impact on traffic. This change, unfortunately, also means construction delays for BART into San Jose.

A few people have dismissed the 38% grade in my town as not much of an achievement. Here’s what a group of Shimano Giant pros on a training ride last spring look like on a 30% grade in Sheffield. I realize they’re on bigger gears and riding on tired legs, but I think it gives you an idea of the difficulty of extreme slopes like this. Video again courtesy of Lynne.