A few days ago, Tom in Brazil told me about Strava Labs new KOM map tool. You can look at a map of the segments for which you own the KOM and QOM. “Segments” are user-defined routes in Strava by which Strava users can compare themselves against other riders who bike the same route. Whoever has the best time on a segment owns bragging rights as King of the Mountain or Queen of the Mountain. Strava also flags downhill segment winners as KOMs. 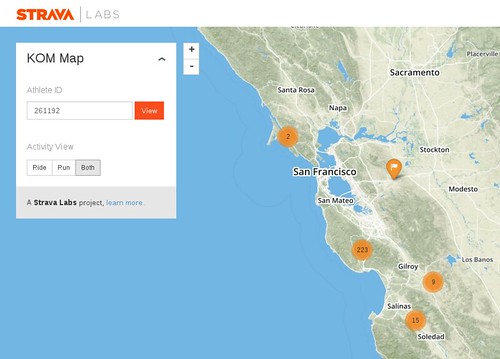 I completely ignored this feature because I know I don’t own any KOMs. I eventually looked at a handful of pro athletes I follow to see how this feature works for them, zooming into the San Francisco Bay Area and Santa Cruz region. The above map, for example, shows the number of KOMs for Ben Jacques-Maynes, a locally popular pro racer who rides for Jamis-Hagens Berman. You can zoom further into the map to see he owns several KOMs along the steepest parts of Mountain Charlie Road, which I take on my commute over the Santa Cruz Mountains. His 13.4 MPH gives him first place on Dual Crushers; my own 7.2 MPH pace places me at 1039th place out of roughly 1800 recorded efforts.

Let’s look at another local(-ish) athlete, Katie Hall. She rides for UnitedHealthCare Pro Cycling. Her local QOMs are mostly in the East Bay, likely earned when Hall rode for Berkeley. 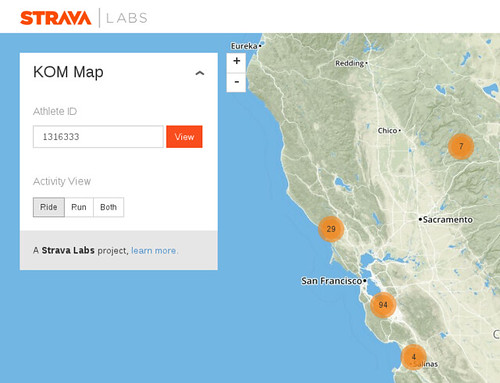 Just for fun, I entered my own Strava ID into the KOM map, and surprise surprise, three segments appeared! 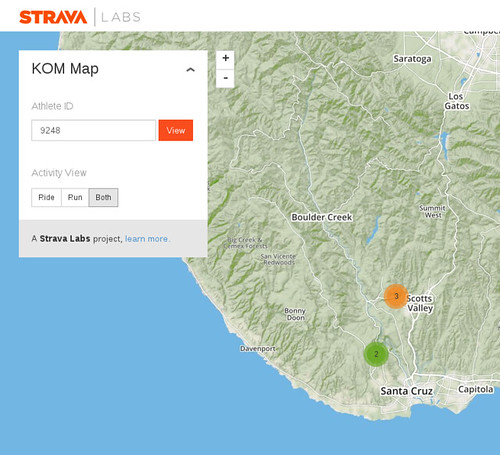 The first one, titled West Zayante Road Climb, is clearly a GPS error, and I will flag it as such soon. The second one — York Road Climb — is legitimate, but only three people have climbed this isolated residential road in my hometown. The only own this 350 yard segment on an 11% grade because of my “Ride Every Roads” project.

I’m tied for first place among 784 other riders for a fast descent on Mount Hermon Road between Scotts Valley and Felton, where I average 40 MPH over a half mile. This happened over three years ago and I don’t remember the ride, but I probably drafted a truck. Of course, now that I’ve called myself out, somebody’s going to grab the KOM this weekend after the roads dry out.

What does your KOM map look like? What surprises do you find?