Richard MasonerOctober 7, 20143 Comments on This post is a secret message

Steganography is the practice of hiding a secret message inside of another message or media such that it’s presence is not obvious to the casual observer, hiding it in plain sight, as it were. The trick of extracting a message by pulling the third word of every paragraph in a letter is a form of steganography. In the computer age, we encode secret messages inside of image files.

Now I will reveal a secret known only to the secret members of the All Powerful Bike Lobby: You can identify the key conspirators of this group through secret steganographic messages hidden in their GPS uploads to the various bike ride tracking services. Why else would we make our rides so public?

More bike news revealed below the photo of the cyclist on San Fernando Street in downtown San Jose, California. 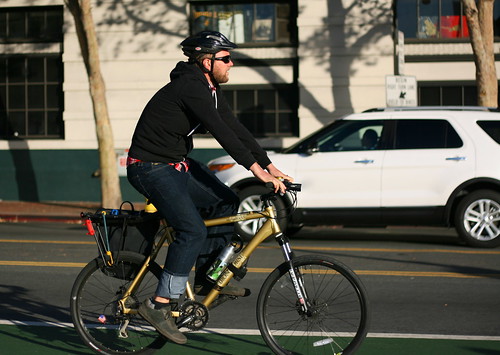 Anti-harassment legislation on the books in Kansas City, MO.

Cassidy of the East Side Bicycle Cooperative is an avid, confident and competent take the lane cyclist. So why in the world would he oppose a ban on sidewalk cycling?

The transportation and environment committee for the city of San Jose met to discuss the sidewalk ban for downtown San Jose last night. The committee dropped back and punted the controversial issue to the full city council. Prominent members of the bike lobby appeared to argue their case. Committee members Don Rocha (D9) and Xavier Campos (D5) said they do not support a ban; Sam Liccardo (D3) and Rose Herrerra say they will continue to push for at least a partial ban.

Raleigh USA talks with lobbyist Nikki Javurek about her job as a full time member of the All Powerful Bicycle Lobby cycling advocate at People For Bikes.

We have a high rate of participation in our autumn bike to work day in Santa Cruz County, California.

The downtown #santacruz scene for the fall #BIKE2WORK day. #scsnews Boy is brisk this morning. pic.twitter.com/q0sGudAsVD

From the archives: We indoctrinate children on the value of active transportation through the Walking School Bus.

Bike riders never mistake the gas for the brakes. And hardly ever ride through donut shops without stopping.

A nice profile of a bike commuter in the local news for Johnson City, TN.

NatGeo: Beijing and the Bicycle.

Pass the word, members of the Bike Conspiracy: Santa Clara PD and Levi’s Stadium Authority community meeting to discuss transportation tonight at Don Callejon School on Lick Mill Boulevard, Santa Clara, 7:00-8:30pm. Talking points: open the trail to at least the Great America parking lot, which can alleviate the problem of all of those pedestrians getting in the way of car traffic after the game is over.

What is your secret bike message for the day?