People in Santa Cruz County California were stuck in gas lines and traffic for hours after the 2011 Tohuku earthquake struck Japan. What’s your plan if there’s a real tsunami, and you have minutes to evacuate?

Tsunami Awareness Week apparently began yesterday. People who live in, bike through, and visit coastal California should be aware that tsunamis can be a hazard. The Santa Cruz area and Monterey Bay region are susceptible to both locally generated and distant source tsunamis. Distant source tsunamis are those created by large earth movements somewhere in the Pacific basin, such as the 2011 Tohoku Earthquake and Tsunami that devastated much of the Pacific coast of northern Japan. The tsunami from that earthquake took nine hours to reach the California coast, where it caused $20 million in damage to the Santa Cruz Harbor. These long distance tsunamis can give local emergency planners plenty of time to give warning and evacuate coastal areas.

The morning of the tsunami’s arrival, several people lined up along the coast in Santa Cruz to watch the incoming surge. It wasn’t expected to be much more than a couple of feet high, so they were safe as long as they watched from the top of a cliff.

I was riding the bus to my office “over the hill” when I saw dozens of cars at the summit of the Santa Cruz Mountains, with people milling around in their pajamas. I learned later that an impressive game of telephone transformed the predicted three foot wave into a 300 meter surge of destruction, so I could understand why people camped out at nearly 2000 feet above sea level. People living in low-lying areas of Santa Cruz County became anxious after watching footage from the damage in Japan. According to the Sentinel, traffic was at a standstill by 6 AM at several locations in Watsonville, with traffic finally clearing up by about 10:30 AM. Up to 90% of students didn’t show up in Pajaro Valley schools that day.

“It was very concerning to me to see the impact of all those cars on the streets at one time” said [Watsonville Mayor Daniel] Dodge. “It wasn’t an orderly evacuation.”

It wasn’t a real emergency, but this episode could be considered a trial run of what might happen after a real tsunami warning.

The Monterey Bay coastline is especially vulnerable to tsunamis generated by quakes on the San Gregorio Fault, which runs just offshore. A major coastal quake can result in a tsunami that can hit the coast within minutes, and with no official warning. Officials say that California residents and visitors should learn to time the duration of a quake (yeah, right) — anything longer than 20 seconds can mean that a tsunami is imminent and you should seek higher ground immediately.

Another possible source of locally sourced tsunamis might be an underwater landslide along the steep underwater slopes Monterey Bay. Finally, earthquakes from the Cascadia Subduction Zone stretching from northern California to Vancouver are another local source of tsunamis.

If you feel a large, long-lasting earthquake, or if the warning sirens sound, it’s time to move to higher ground. In Santa Cruz, that’s just about anyplace within a quarter mile of the coast. The sloughs, the harbor and the San Lorenzo River are other run-up zones that you should escape from. 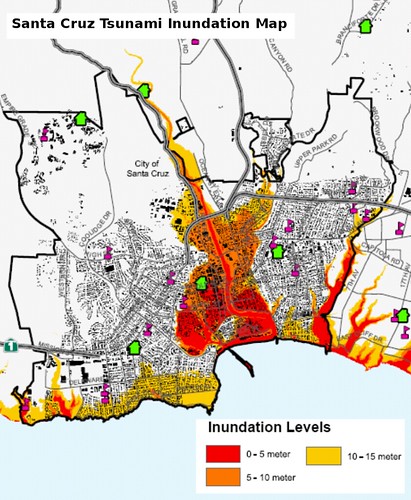 The general advice from the Santa Cruz County Office of Emergency Services says:

Go to an area 100 feet above sea level, if possible, or go up to two miles inland. If you can not get this high or far, go as high and far as you can. Every foot inland or upwards may make a difference.

This is a bicycle blog

We watched video of inundated cars during the 2011 Japan tsunami. For locally sourced tsunamis especially, emergency planners say to avoid driving after an earthquake and to escape on foot. Tsunamis move faster than a person can run, so you should vamoose as soon as you realize a tsunami might be on the way. Experts say that if you can see the wave, it’s already too late to escape from it. 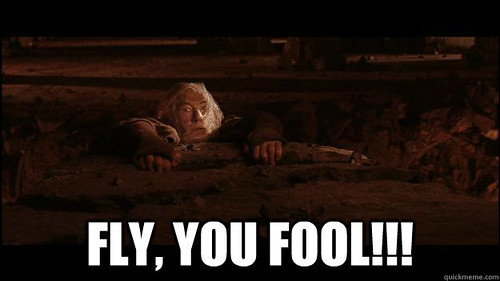 You can see from the Santa Cruz inundation map that the entire Boardwalk and Wharf areas are in the inundation zone, as is Beach Flats and most of downtown. Luckily, high ground is in close and obvious proximity to the Boardwalk and the Wharf. From downtown, I’d go west and north towards Mission Hill.

In Capitola, the Village and the area immediately around Capitola Creek are vulnerable all the way to Highway 1. The direction to high ground is fairly obvious. From Capitola Village, east of Monterey Avenue is high ground.

Watsonville looks a little bit scary with a lot of low-lying red zones, but most of that is agricultural land and open space. 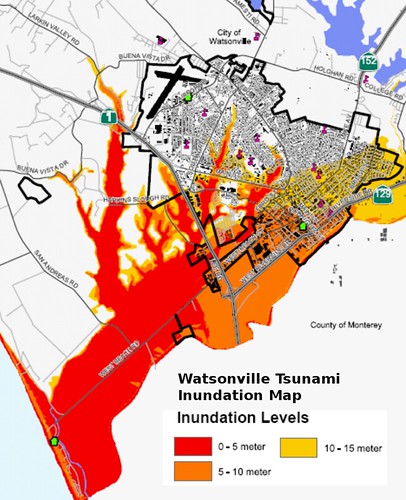 Still, there are some occupied spaces near the sloughs for smaller tsunamis. The entire area near the Pajaro River and downtown Watsonville are vulnerable to larger tsunamis. In 2011, gridlock from people seeking higher ground kept them trapped in their cars for hours. One journalist wrote it took an hour to travel 2.5 miles.

It’s up to two miles of walking to get from downtown Watsonville to a safe zone north of Martinelli Street. That’s a half hour on foot, or 10 minutes by bike. It might be worthwhile to consider a bicycle as part of your disaster preparedness.

The people in the vacation rentals on the coast at Pajaro Dunes — you have a disaster response plan, but even with that you all might be kind of hosed. It’s over six miles via the two lane Beach Road and through downtown Watsonville to high ground. A realistic option to nearby high ground is probably via the bike path north into Sunset State Beach.