Richard MasonerApril 24, 20144 Comments on Where do cyclists shop?

I was playing around with Strava’s Global Heat Map, which plots the entire Strava dataset onto a map to show where people ride. I zoomed into my town and discovered it’s easy to see where cyclists congregate. 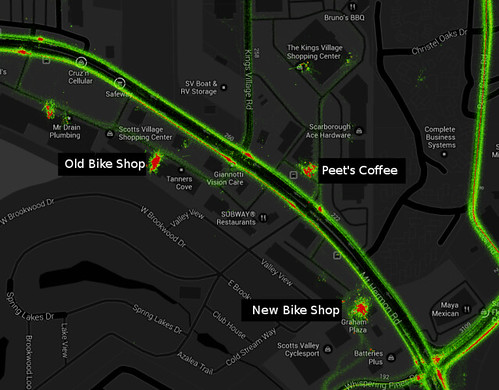 I’ve labeled the larger red clusters. “Old Bike SHop” shows the old location of my local bike shop and “New Bike Shop” is the new location. I already know Peet’s Coffee on the north side of Mount Hermon Road is a popular hangout for the local roadie set, but I was surprised to see this preference is so obvious. The other unlabeled cluster at the left marks Coffee Cat, another local coffee shop. The Starbucks Coffee on the south side of Mount Hermon doesn’t even register a blip.

I then scrolled the map down into Santa Cruz to see which businesses are popular with cyclists who log their rides to Strava. The big red blob at the bottom of this map marks the location of Spokesman Bicycles, which is no surprise. The smaller hotspot where Pacific Avenue and Front Street form a triangle is Verve Coffee Roasters. Coffee and bikes once again! 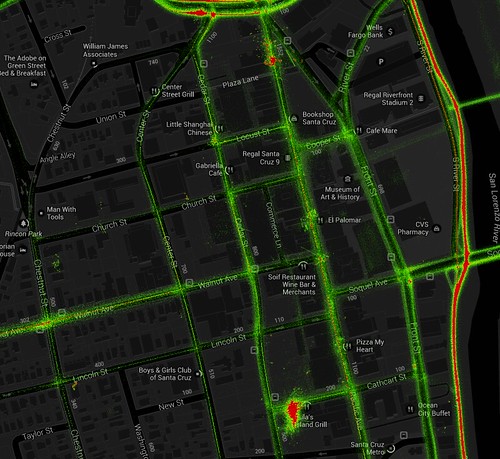 Next, I went “over the hill” into San Jose and looked at the participating merchants map for the Silicon Valley Bike to Shop Day, which occurs on Thursday May 17, 2014. Willow Glen is a popular route for cyclists of all types, and businesses who reach out specifically to people who ride can benefit from this targeted marketing. The hotspot, incidentally, is Mike’s Bikes. 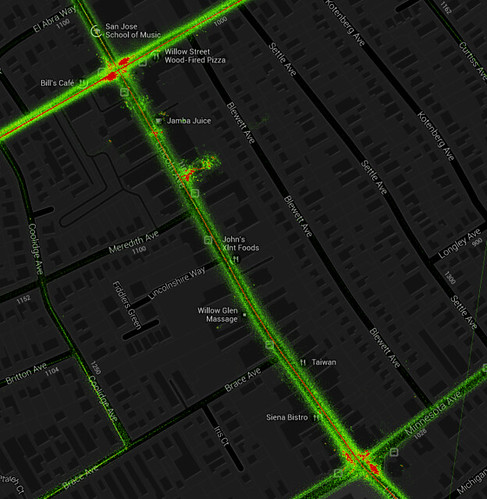 Let’s say you want to identify non-bike businesses that see a lot of shoppers who arrive by bike. Can the heatmap help with that? Coffee shops that aren’t Starbucks obviously see a lot of cyclists, but what else can we find? This one spot in the city of Santa Clara popped out at me, where STevens Creek Boulevard crosses Lawrence Expressway. Did there used to be a bike shop or coffee shop here? Otherwise, this is kind of a cycling dead zone. 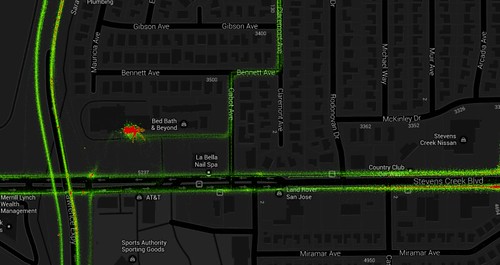 Update: I’m told a cafe at this location was a stop for a La Dolce Velo group ride.

Obviously, these maps show only those who record their rides using the Strava cycling app. Some claim that Strava participants tend to be those who are “avid” cyclists, though we have no real data on that as far as I’m aware. They probably do tend to be higher income and goal-oriented individuals, which are probably a desirable demographic for any retail establishment that wants more spending at their store.

You can view the global heatmap here. South Bay people, I also encourage you to participate in the Silicon Valley Bike to Shop Day event coming up on May 17.