Richard MasonerFebruary 18, 20155 Comments on A lost helmet, a broken crank

Luke Davidson of Australia broke his crank spindle during the Mens Team Pursuit Qualifying round on this first day of the UCI Track Cycling World Championships held at National Velodrome on February 18, 2015 in Paris, France. Ouch.

This morning I biked to my bus stop, dismounted and dangled my helmet on the handlebars as I waited for my bus to San Jose per my usual routine. The bus arrived, I boarded, read the chapter about critters that can eat their way out of a predator’s stomach in the book I’m reading now (which I highly recommend for both its informative and entertaining content).

As we approached my stop 20 minutes later, I gathered my belongings and couldn’t find my bike helmet. That’s when the realization hit that I never removed it from the handlebars. Rats.

The bus driver confirmed that he saw something white fly off of my bike by Santa’s Village Road on Highway 17. Double rats.

I kind of normally wear a helmet, but I don’t freak out if I don’t have it for my usual 12 MPH commute on a completely separated bike path. If Carol Liu’s bill for mandatory helmets becomes law, I’d be on the hook for a $25 citation, assuming local police actually enforce this better than they enforce our other traffic laws. With court costs and fees, that adds up to $200 in penalties. 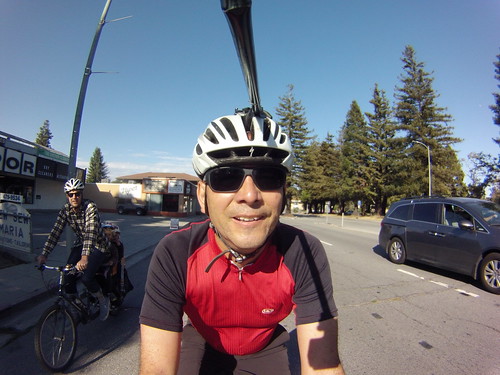 I had hoped Liu’s bill would die a silent death, but she held a press conference when she introduced the bill, claiming “any responsible cyclist always wears a helmet” without actually consulting any cyclists (responsible or otherwise) or even inviting them to her press event. The Sacramento Bee published an editorial promoting Liu’s bill, failing to fact check Liu’s ludicrous but emotionally powerful claim that 90% of California bike fatalities involve helmetless riders. Other media outlets are beginning to follow suite, which means a tough fight ahead for California cycling and cyclist advocates.

Dave Snyder of the California Bicycle Coalition has made the media rounds this week highlighting the reasons California cyclists should oppose this bill.
KQED Forum in San Francisco covered the issue fairly evenly. KPCC in Los Angeles brought Randy Swart of his one-man Bicycle Helmet Safety Institute to debate Snyder. Swart is a nice guy who sees bicycling as a horrendously dangerous activity that requires safety equipment, and his comments about this danger often resonates with the non-cycling public.

Swart phoned his opinions in from his home in Virginia, so media outlets now claim California cycling advocates are “split” on the issue of mandatory helmet legislation. As far as I’m aware, various advocacy organizations around the state have either come out vociferously against a mandatory helmet law, or have so far remained silent. Even my friends who always wear a helmet and chide me on the occasions they’ve seen me ride without the foam hat have stated their opposition to this law.