California Senator Carol Liu of Glendale yesterday introduced SB 192 AKA the “Remove Cyclists From California Roads Law of 2015” or, alternatively, the “Harass Minorities On Bikes Law of 2015.” Her legislation, if passed, will require helmets for all bicycle riders of all ages, and high visibility safety apparel after dark. 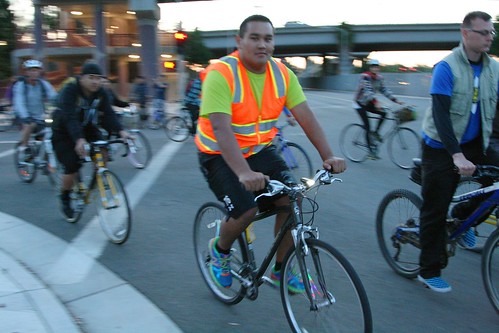 Current California law stipulates helmets only for minors. Liu’s anti-cyclist legislation expands this requirement for all ages of cyclists.

SB 192 would also mandate retroreflective high visibility safety apparel that “meets the requirements of the American National Standard for High-Visibility Safety Apparel and Headwear” for those caught out after dark. Yay, fun.

Bill sponsor Carol Liu is a 73 year old Bay Area native who now represents State Senate District 25 in southern California. She has generally been supportive of alternative transportation in her legislation, so now is a good time to explain how her legislation will decrease safety for cyclists and increase the number of cars on the road. Her constituents can contact Senator Liu through this web page. Those who live outside of California State District 25 are invited to call her office at (818) 409-0400 to register your thoughts on this bill.

Via various sources, including Biking In LA and CABO.

See California Bicycle Legislation 2015 for all issues I’m tracking this year in the California Assembly.