The SummerHill development proposal in Danville, CA has stalled because opponents claim the development failed to properly account for bicycle safety in the project environmental review. 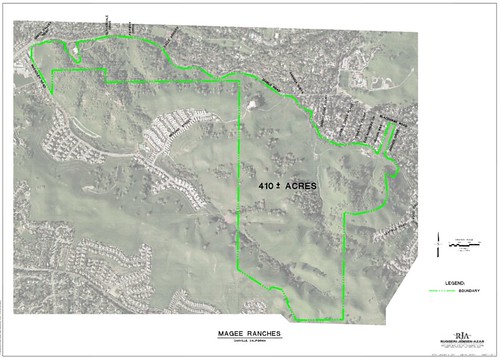 SummerHill homes wants to build 69 homes on the 410 acre Magee Ranch off of Diablo and Blackhawk Roads in Danville, with about 270 acres set aside as open space. The homes will be clustered in 40 acres of flat space within the property. Danville City Council accepted the EIR and approved this project in 2013.

“Save Open Space Diablo” — mostly consisting of Diablo Road residents — filed suit to stop the development. They claim the city violated its own plan with an illegal re-zoning. They also claim the EIR is invalid because it failed to define the traffic safety impact to bicyclists who love to ride to and up Mount Diablo along the roads in this vicinity.

I don’t know the merits of this project or the lack thereof, but it smells like NIMBYism to me, and the cynical application of bicycle safety seems noteworthy. Some Diablo Road residents famously try to close their road to cyclists and ask the Contra Costa Sheriff for enhanced enforcement targeting cyclists, so I’m a little bit skeptical of their concern for my safety.

Nevertheless, Bike East Bay says they’re considering this legal battle because of the important precedent it can set. The bike advocacy group for Alameda and Contra Costa Counties in the San Francisco Bay Area believes the transportation impact portion of an environmental review should include the impact on bicycle safety, with mitigations required for project approval.

The CEQA guidelines published by the state of California says “traffic and pedestrian safety” and “bicycle and pedestrian flows” must be analyzed in any EIR, but this is often a pro forma paragraph that often says “No bicycle or pedestrian safety issues are created by this project.” Indeed, the bicycle safety section from the Summerhill / Magee Ranch EIR says:

Diablo / Blackhawk Road is a popular route used by bicyclists. However, portions of the roadway are narrow and do not have bike lanes. This route is not a designated Bike Route in the Town’s General Plan. Given the narrow right-of-way along Diablo/Blackhawk, both vehicles and bicyclists should use caution. While the project would add traffic to Diablo/Blackhawk Road, it would not significantly change existing conditions for cyclists. In addition, the physical constraints along Diablo/Blackhawk Road (i.e., narrow roadways and shoulders, existing drainages, the close proximity of trees and telephone poles) limit the feasibility of widening for future bicycle facilities.

In response to persistent criticism from local cyclists on this lack of mitigation, the town of Danville promises to toss up a few “Share the Road” signs in front of this development. As if.