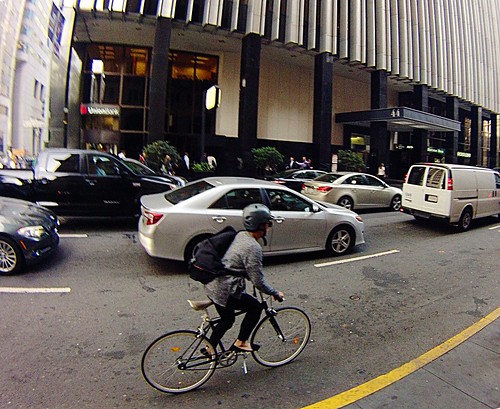 Did you hear the NPR news story earlier this week about Syrian schoolteacher Monzer Omar? He comes to the West seeking to escape the hardships of his home country, but is baffled at the strange sights in Germany.

Melissa Beardsley: Omar’s been in Germany a month already, but some things are still hard to get used to, like adults riding bicycles.

You can read the full story here, but listen to the audio to hear his surprise.

A Sri Lankan man rides a bicycle past paintings for sale on the roadside in Colombo.

The city of San Francisco wants to know how to spend the Visitacion Valley impact fees collected from developers. Bicycle facilities are among the options in their online survey.

Some fun California bicycle history in the Contra Costa Times:

The bicycle came late to California, probably 20 years later than the rest of the country. And when it came, it wasn’t highly regarded as the kind of vehicle that would replace the horse as a reliable mode of transportation.

A man filters past traffic on Bloor Street in Toronto, Ontario Canada. Note the shared lane marking under the truck. As part of a pilot project, the city will install bike lanes on a section of Bloor in 2016–nearly 40 years after the idea was first floated. Accordin to Cycle Toronto, Bloor St is an important route for cyclists. The route is continuous, there is no danger of streetcar tracks and it is supported by a subway. The corridor is defined by its vibrant retail and commercial strips. While Bloor St has a relatively high cycling mode share, there is also a high incidence of car-bike collisions.

A woman in Thessalonika bikes past a mural portraying Europe as the Grim Reaper, with a tiny door near the bottom of its wall-like body and a barbed wire fence surrounding it.

Precog Dash sees a road raging driver kill a cyclist after the two exchange words in this week’s episode of “Minority Report.” Can our intrepid team of future crime cops identify the victim and his assailant in time to stop the murder?

What is Tropicalismo? I think it means Hawaiian shirts and leis. I’ll be there with my camera to find out; 7 PM at the Santa Cruz Bike Church.