Happy Hump Day, all! I took my bike into a refreshing drizzle in the Santa Cruz Mountains this morning. The National Weather Service says we can expect under quarter inch at the very very most between this morning through Friday, but I’m enjoying it while it lasts.

Find ICYMI bike news below the photo of my pals on the path. 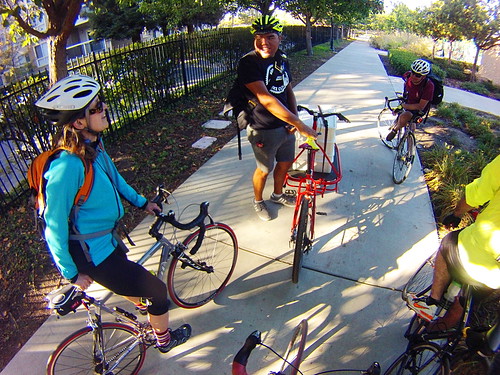 Hit-and-run alert for California: California Governor Jerry Brown signed AB 8 — the Hit-and-Run Yellow Alert Bill — into law. This law establishes a “yellow alert” system, similar to the existing “Amber Alert” system, to quickly notify the public when a hit-and-run crash occurs that results in death or serious bodily injury. In California, the victims of felony hit-and-run are often those on foot and on bike. A similar system in Colorado resulted in a dramatic increase in hit-and-run arrests.

Speaking of hit-and-run, this one in San Francisco was captured on camera when the driver of a red Cadillac apparently ran directly into a cyclist on purpose.

Instead of stopping to snap a photo of a scofflaw driver, one cyclist reached in to grab the keys and dropped them down a storm drain.

Complete Streets in California Highway Funding? Governor Brown called the California legislature into a special session to “enact permanent and sustainable funding to maintain and repair the state’s transportation and critical infrastructure, improve the state’s key trade corridors and complement local infrastructure efforts.” Senator Jim Beall’s contribution to this effort is his highway funding bill SBX 1-1. Among the provisions in this bill is a requirement to require either Class 1 (bike path) or Class IV (protected bike lanes) for most roads with average daily traffic (ADT) greater than 20,000 and a speed limit over 25 MPH when using certain state funds for the construction. The California Bicycle Coalition has an online petition for this, as well as for ABX 1-23, which doubles funding for the California Active Transportation Program.

NYC has an opening for Senior Director of Bicycle and Pedestrian Programs reporting to the Deputy Commissioner for Transportation Planning & Management.

Now is as good as time as any to remind you of the Victoria Transport Policy Institute “Whose Roads” white paper, which was updated in 2013 and discusses the realities of road funding in North America. Spoiler alert: cyclists generally overpay for the facilities we use.

How to ride a bike like a cop. And here are more photos from this Des Moines bike patrol ride along.

Kansas cop gives a bike to a homeless man who was walking five hours to his job.

Crow that attacks cyclist just wants to be friends.

Refugees use bikes to get around.

When gas stations close because of a military coup in Burkina Faso, a bicycle may be a practical way to get around.

These kids in Yangon don’t need no stinking rain to get their bike wet!