This contest was new to me. 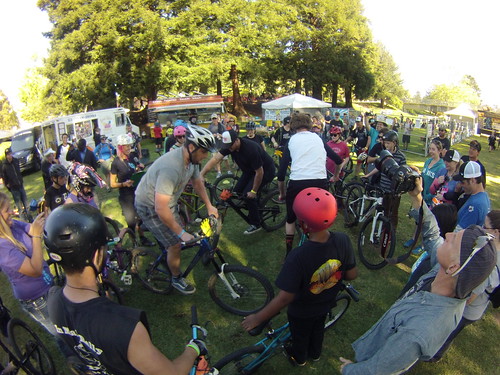 I had a good time walking the Santa Cruz Mountain Bike Festival last weekend in San Lorenzo Park near downtown Santa Cruz, California. The opportunity for the public to spend half a day on high-end demo bikes was probably the main draw, but the Sweetlines Shred Games were a real crowd pleaser. Mountain biking coach Kat Sweet organized several games that allowed any and all to show off their skills.

Among the games was this crazy thing where contestants ride in circles. Put a foot down or fall over and you’re out.

That doesn’t sound too hard, right? Here’s the catch: the circle — as bounded by those people holding bikes as barricades — shrinks as the game progresses. As the circle shrinks, the game becomes increasingly physical as the cyclists jostle for space. The winner was the big guy in the gray t-shirt.

Does this crazy bike skills contest have a name?﻿