The League of American Bicyclists (LAB) released their third annual “Where We Ride” report yesterday in which they crunch the numbers from the 2014 US Census American Community Survey. 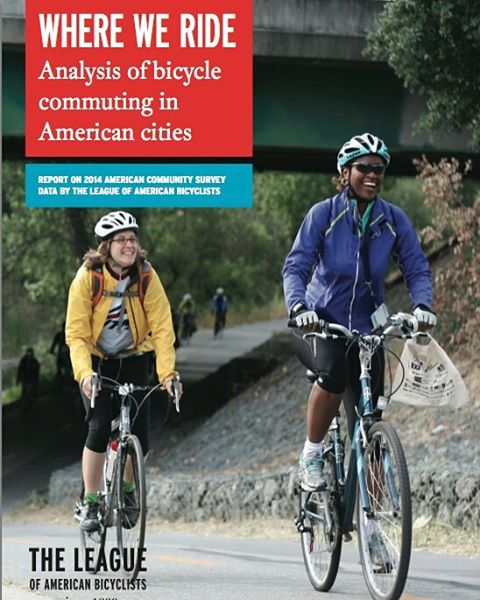 As LAB report notes, “There are at least two limitations to the data: 1) it only measures how someone usually gets to work in the last week before the question was asked, and 2) it only captures the mode used for the most distance. These limitations mean that occasional bike commuters and multimodal commuters who use bikes are unlikely to be captured by ACS data.”

In San Francisco, for example, the ACS data comes nowhere close to counting all of the people who ride bikes to work. Thousands of people either bike in from neighboring counties, or they bring their bikes onboard transit services from those other counties.

The other weakness is the ACS data does not capture all bike trips. If you bike to school, to the cafe, to the store, or for recreation, your trip is not captured in this survey. You have to find this other travel information at either the National Household Travel Survey, which captures travel with multiple modes for all reasons at the national level, or the California Household Travel Survey for California. Both of these are large, occasional surveys; California, for example, collects statewide travel data once a decade. Perhaps a clever data scientist has found a way to predict actual bike usage from the ACS data by finding correlations with the travel survey data and the handful of city traffic counts that now include biking information.

With all of those disclaimers out of the way, I think the data is useful to capture large trends. You can read the report here.

To encourage you to read the report, I’ll have a trivia quiz with a GIVEAWAY tomorrow. I’ll have one simple question that I will post Friday late morning (California time); the first to answer it correctly wins a copy of the brand new Horton Collection book Shoulder to Shoulder: Bicycle Racing in the Age of Anquetil or an Amazon gift card if you live outside of the USA.