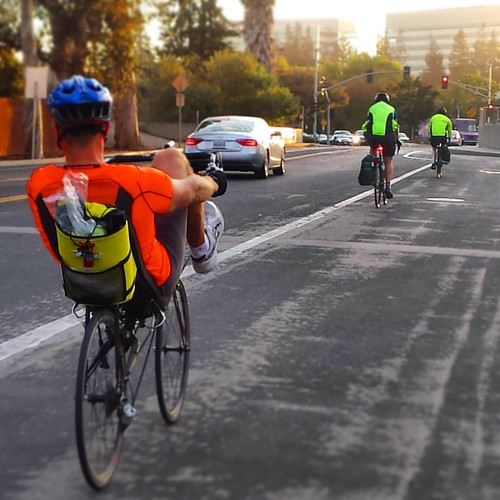 A young migrant cycles through the ‘Jungle’ camp in the northern French city of Calais on October 29, 2015. Winter is coming to Calais, raising fears among aid groups about worsening conditions for the thousands of migrants living in a makeshift camp. About 630,000 migrants have entered Europe illegally since the beginning of the year and Calais is, for some, the last hurdle before reaching England, their dream destination.

Belgian journalist Johny Vansevenant and former Belgian cyclist Eddy Merckx pose on October 28, 2015 during the press conference to present the book ‘Eddy Merckx. The biography’ by Johny Vansevenant, the result of ten years researches and interviews, in Brussels

Donated child bikes are seen at a huge donations center for migrants and refugees at the Messe trade fair grounds on October 29, 2015 in Hamburg, Germany. The center was launched in early September as the influx of migrants in Germany spiked and since then the center has moved into an even bigger hall at the trade fair grounds. Germany is struggling to accommodate what it expects will be at least one million asylum applicants this year and tens of thousands of volunteers are doing what they can across the country to help.

Cyclists ride past a graffitoed wall in Mumbai on October 28, 2015. Graffiti featuring as social awareness messages, civic causes, religious figures, politicians, as well as daily life scenes cover the walls of certain streets of Mumbai. Written in English, Hindi or Marathi, these messages are of late being for educational purposes than merely contributing to embellish the country’s financial capital.

A young man pushes his bicycle through debris following a reported air strike by Syrian government forces in the rebel-held town of Douma, east of the capital Damascus, on October 29, 2015. Syrian government air strikes on a market and a hospital killed several civilians in Douma, the Syrian Observatory for Human Rights monitor and activists said. Dozens more were wounded, several seriously, and the toll is likely to rise.

Yamaha’s electric-power-assist bicycle, YPJ-MTB concept, is displayed at the Tokyo Motor Show in Tokyo on October 29, 2015. The biennial motor show’s 44th edition, which runs until November 8, features 160 exhibitors from a dozen countries.

Palestinian men ride their bicycles in Gaza City on October 28, 2015.

Leah Rich pushes her strider bicycle off stage after presenting as students in Michael Caston’s class Design for Marketability and Manufacturing presented their new product development feasibility projects on Wednesday, October 28, 2015. Rich’s design is to help an aging population who may have partial mobility. The provided caption says “Aurora Campus,” but as far as I’m aware the only MSU-Denver campus is at Auraria, located a dozen miles west of Aurora in downtown Denver.

Two men push a bicycle carrying their belongings as migrants and asylum seekers mostly from Sudan leave the ‘Jungle’ camp in the northern French port of Calais on their way to respite care centres on October 27, 2015. Winter is coming to Calais, raising fears among aid groups about worsening conditions for the thousands of migrants living in a makeshift camp. About 630,000 migrants have entered Europe illegally since the beginning of the year and Calais is, for some, the last hurdle before reaching England, their dream destination.

Sri Lankan military person patrol in street as an ethnic Tamil woman ride bicycle on October 25, 2015 in Kilinochchi, Sri Lanka. Sri Lankan Prime Minister, Ranil Wickremesinghe, seeks international assistance ahead of a donor conference for the social and economic development of the war ravaged areas in the country.

Police examine the carnage after a driver slammed through a homecoming parade crowd in Stillwater, Oklahoma on October 24, 2015.

Bike-riding French gendarmes stand guard on October 22, 2015 at the railway station in Moirans, near Grenoble, two days after the local traveller community (i.e. Romani) launched violent protests after authorities refused a request for prison leave. The local traveller community in the Alpine town of Moirans had requested temporary leave for two jailed members so that they could attend the funeral of a brother who had died in an accident after recklessly driving a stolen car into a tree.