Hi all. Is it finally autumn in California?

Remember, San Jose Bike Train runs this Wednesday, November 4 at 8 AM from San Jose Diridon Station, with a pickup shortly thereafter from Bel Bacio Cafe. The trails should be dry by then. More bike news below the photo of our last Bike Train, which took place on Back to the Future Day. 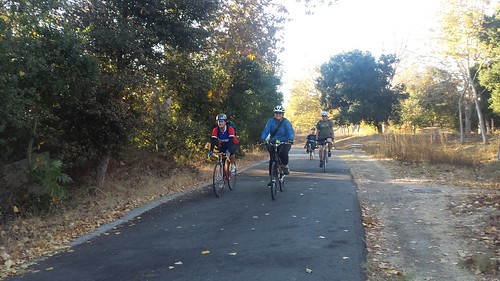 Who knew we have a problem with bike theft in Santa Cruz, CA?

There’s been 2,100 bike thefts in Santa Cruz over the past six years.

You don’t have to go far to find victims of bike thefts in Santa Cruz and the loss can really hurt. Many bicyclists rely on their bikes as a main form of transportation.

UC Santa Cruz installs new BikeLink electronic lockers on the main campus and at the Coastal Science Campus (yay!). These lockers are available for employees, students and visitors who have the BikeLink card, a stored-value card. I put $20 on my BikeLink card in 2012; I use it fairly frequently and still have $13 of value on the card.

Never saw this before so I had to capture the moment. Car blocking bikelane being towed! #BikeTO #BikeLanes pic.twitter.com/tCbHR9yrbY

From Psychological Science: Even Hands-Free Devices Are Dangerously Distracting.

Journalist goes on a ride-along during police bike patrol training in Sacramento.

Yet Another Amendment to remove bicycle funding from a Federal transportation bill.

Human Transit on empathizing with change aversion. I’ve mentioned several times that the public’s fear of road diets and Bus Rapid Transit is akin to a minor change in the look and feel of Facebook.

Here’s a slightly different take on the usual “single witness suicide swerve” — sidewalk cyclist falls from his bike into the path of a passing motor vehicle in Lafayette, LA. When you pass somebody on a bike, don’t do it so closely and swiftly that a minor wobble results in death, okay? Is that too much to ask?

UK study: motorists pass cyclists with less speed and more space on roads without center lines vs those with painted centerlines. This study also showed painted bike lanes make no difference in passing distance and speed.

Biking In LA reminds us how to lock up our bikes in his daily collection of bicycle news.